Dougal Townsend of GNS Science was part of a team that flew over Marlborough to assess the impact of the recent earthquakes on the landscape and infrastructure. Although relatively minor compared to those that impacted the Christchurch area in 2010 and 2011, there were nonetheless some isolated, but significant effects. All these photos were taken by Dougal: 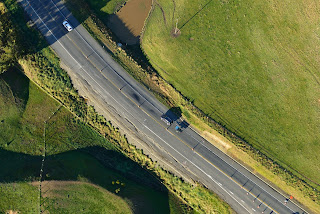 Here you can see damage (cracking) to State Highway 1 between Seddon and Ward (near Caseys Road turnoff) following the Lake Grassmere Earthquake. 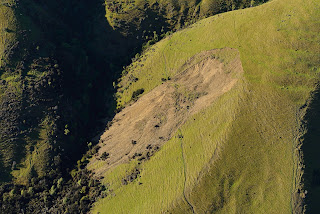 Large landslide in the Flaxbourne River catchment (about 8.5 km west of Ward). 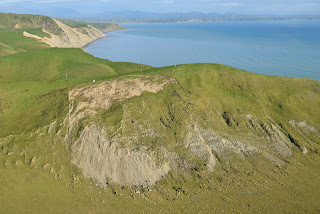 Another Large landslide. This is  in Miocene mudstone, just south of Cape Campbell. A whole section of the hillside has slipped 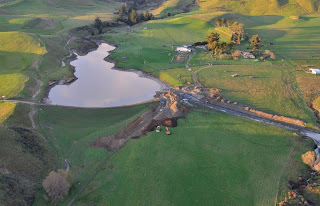 Bell’s dam near Seddon. Damage (cracking) was sustained during the Cook Strait Earthquake and was exacerbated during subsequent aftershocks and also during the Lake Grassmere Earthquake. The channel was dug to partially drain the dam, to lessen potential flood risk to the town of Seddon, which is 10 km downstream to the NE. 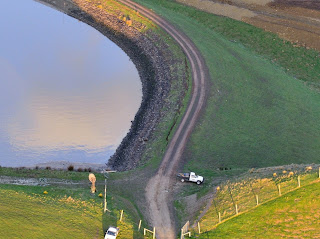 A closer view of the cracks along the top of Bell’s dam. alongside the vehicle track 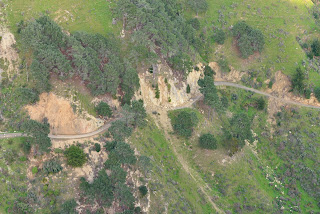 This image shows rock fall on a farm track about 2 km southeast of Ward (track goes up to Weld Cone). The rock is Late Cretaceous sandstone and siltstone. 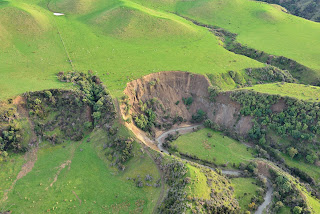 Ground damage in Needles Creek, west of Ward. Cracking of the farm track (centre left) is from the Lake Grassmere Earthquake, whereas the minor landsliding of the terrace gravels on the right may be from a combination of storm (rainfall) and earthquake (ground shaking) damage.