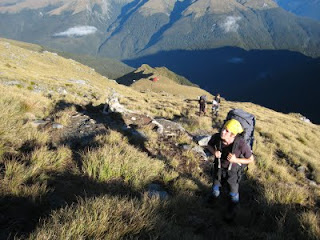 Today we left the hut at 9 am and hiked 200m higher and then horizontally leftwards (North) to the glacier. 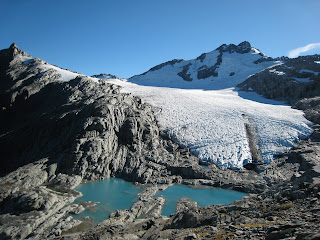 The weather was fine and by midday we were roped up to step off the rock onto the ice. Initially this is a bit hazardous as the ice is undercut and could potentially break off right where you are standing. Soon however we were established on the centre of the glacier snout, a couple of hundred metres above the ice cave at the terminus.. 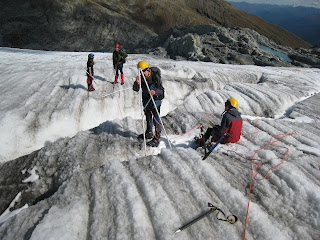 Our job was to measure the length of a network of plastic stakes (ablation stakes) that had been inserted into the ice in November last year. This gives information on the amount of melting of the ice surface over the summer months. The data is combined with information from a weather station that is set up nearby and allows an analysis of the factors that effect the annual mass balance of the glacier over time.

We found that most of the 6 metres stakes had melted out of the ice by 5 to 5.5 metres. Some of them had melted out completely and were found lying on the surface or in shallow crevasses, and some remained unfound. 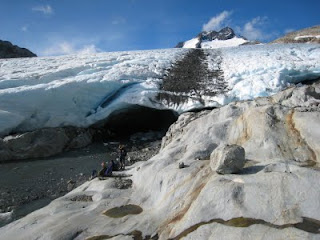 I was quite amazed at the condition of the ice this year. Normally the previous winter snow would cover the slopes from about one third or one half of the way up the glacier. This time there was hard ice all the way up the slopes to the peak of Mount Brewster, and instead of smooth snow the surface was broken up by numerous crevasses.
By 4pm we were back off the ice. We explored the glacier margin and checked out the terminal ice cave. There are fantastic glacial landforms in front of the ice terminus. As the ice has retreated it has left behind all sorts of randomly scattered boulders, scratched rock slabs and sculpted pot holes in the bedrock. At 7pm we were back in the hut.