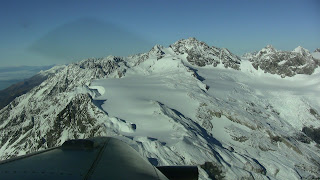 Today we flew up to the Annette Plateau in a Pilatus Porter ski plane. We had a big pile of gear – boxes of Radar parts, ice axes, crampons, snow shoes, food and emergency tents, sleeping gear and food. The weather was sunny and still – having expected bitter cold, we had come a bit overdressed and had to peel off a few layers to cool down. 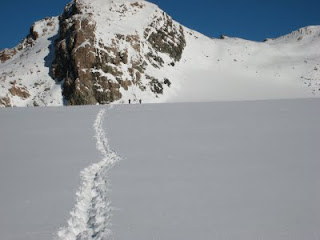 We planned our radar survey to cross the glacier in three parallel lines 250 metres apart, with another line down the centre at 90 degrees. 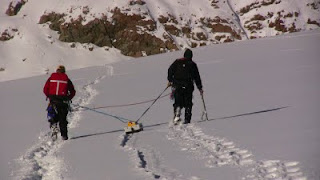 We roped up on two ropes, just in case there were any snow covered crevasses ready to swallow one of us up, although as glaciers go the area looked very safe, with no visible cracks on
the surface at all.

This photo shows Lawrence and Matt pulling the high frequesncy (500 MHz) Radar between them. 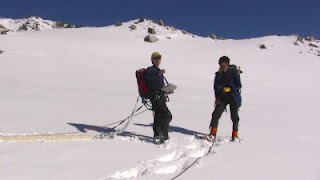 Here Lawrence and Brian are getting ready to use the lower frequency 25 MHz radar. It has a 13 metre long antenna which is pulled along the ground. Both systems worked very well and showed that the ice thickness was a maximum of 150 metres. 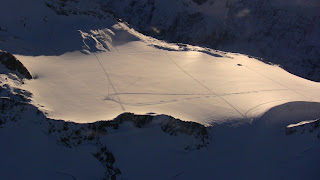 In the final picture you can see our tracks as we passed over on the return flight to the airport. It was a successful days work!

Although we still have four other sites to survey, the weather forecast is very bad for the next week or so. We have decided to curtail this visit to the mountains and return again when the weather clears up. I hope it will be soon!