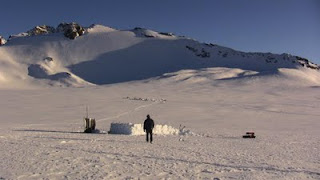 Yesterday we dragged the drill and equipment across the glacier, set it up in a newly dug pit and made a protective wall of snow blocks. After 10 metres we came to wet ice and decided there was no point to continue. Back to the drawing board.
After having further close looks at the radar images, we decided to have a third attempt higher up the glacier. 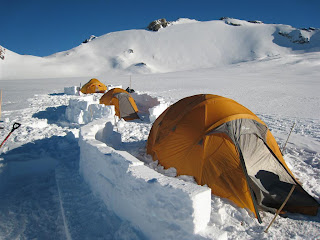 Today we again moved all the gear to a new drill site. This time we hit wet ice only 4 metres down. Our first 45 metre core was starting to look like a lucky strike compared to this!

We decided to strike camp. Within a few hours most of the gear was packed and stacked in heaps. Later in the afternoon 3 helicopter loads got most of the gear away, as well as Uwe, Xinsheng and Yulan. Dan and I stayed on, doing some final sorting and planning to fly out by plane at 11 in the morning.