See the video of our visit to White Island:

Here’s a bit more about what we did during our day on there: 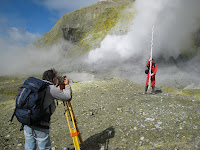 Karen and Agnes set off with their water monitoring equipment, whilst Brad, Steve and I started the elevation survey, measuring height differences between an extended series of fixed points that had been marked by wooden stakes driven into the ground. Whilst Steve held the survey pole, Brad aimed his leveler at it from an adjacent measurement station and was able to read off the height difference between the two points. By sighting between the points in this way, we continued our survey past some very loud and active fumaroles, in a broad area towards the crater lake. Occasionally we stopped to take photographs of interesting features, or discuss the history of the formations around us. Once or twice we were enveloped in steam and gas from the fumaroles, and rained on by acidic water droplets (acid rain) that gave a burning, prickling sensation to my eyes.

Past measurements have shown that the ground near the crater has been rising by two or three centimeters every three months for several years, mainly due to an increase in heat in the ground. From our measurements we found that the hottest area of ground near the most active fumaroles had risen up to a maximum of 50mm since the last survey, with the amount of uplift reducing quickly a short distance away. These results show continuity with the long term trend of uplift.

Almost towards the end of the survey, we met up with Karen and Agnes, and I watched them sampling the water from a very active hydrothermal spring that was gushing and splashing nearby. To make a variety of measurements of the water chemistry and isotopes, they scooped water out of the spring and put it into various sampling bottles.

Once our survey was done, Brad and I walked over to the lower of two webcams to give the glass a wipe, as the photos had been getting quite fuzzy due to a build up of dust. There in front of the camera was ‘Dino’ in real life. He is a small dinosaur, apparently famous the world over for having arrived mysteriously to take up residence in full view of White Island’s Crater Webcam some years ago: 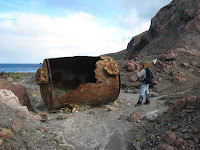 Before we returned to the helicopter, we walked through the ruins of the old sulphur mine, where there were rusted machines and derelict buildings. Finally we were ready to leave and as we turned in a wide loop above White Island, I was very impressed to have been able to have had such a close encounter with such a remarkable place.