Last week I visited the GNS Science office at Wairakei, just outside Taupo. This is where a lot of research is done into New Zealand volcanoes and geothermal fields.

First up this morning was a trip to White Island, One of the most frequently active volcanoes in New Zealand, where I assisted a small team of volcanologists on one of their routine visits. The purpose was to test the chemistry of the groundwater appearing out of numerous springs around the crater area, as well as to survey the ground surface elevation to check for sinking or uplift. In the team were GNS scientists Karen Britten, Agnes Mazot, Brad Scott and Steve Sherburn.

White Island is 50km north of the Bay of Plenty coast, visible from nearby towns and often seen to be emitting a plume of steam. From the mid seventies to the year 2000 it was frequently in a state of eruption. Since then it has quietened down to become relatively peaceful for the last few years.

For our visit we flew by helicopter from Rotorua, first across beautiful farmland and large pine forests, then out to sea where White Island soon loomed up in the distance. I had seen many photos of the island before but was excited to have the opportunity to actually set foot on it in reality. 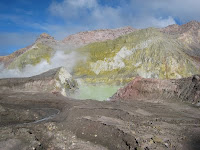 It is a horseshoe shaped island, with a high surrounding ridge around the inner crater area that includes a large yellow greenish crater lake. This lake formed after the most recent eruption phase and is only about 6 years old. On the South East side the ridge is breached in a couple of places, where the land slopes gently to the sea shore at a low angle.

On our arrival we flew in from this side, and landed in the hummocky area a couple of hundred metres in from the shore. 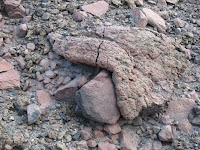 Our pilot switched off the engine, and immediately the sound of hissing and gushing fumeroles dominated. There was a strong smell of sulphur and clouds of steam wafting up from numerous points further in towards the centre of the main crater.

The ground was littered with blocks of scoria and lava bombs from past eruptions. The photo shows a lava bomb that was molten when in landed on top of another rock, before it solidified.