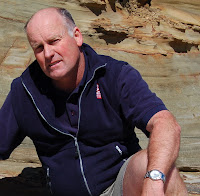 Last week, along with several other GNS scientists, I accompanied sedimentologist Greg Browne to the coast near Nelson, to check out his new dinosaur footprint discovery. His findings are being published this month in the New Zealand Journal of Geology and Geophysics. (photo courtesy of Marianna Terezow, GNS Science) 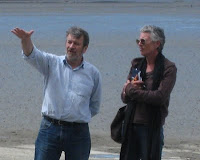 Kim Hill from Radio New Zealand joined our group as well. Here she is in conversation about the discovery with well known GNS geologist Hamish Cambell who was part of the team. To hear Kim’s interview with Greg go to: http://www.radionz.co.nz/national/programmes/saturday/20091107
Greg works in the hydrocarbons section at GNS Science, and has been studying the rocks of north west Nelson for many years. These sediments are of interest to a hydrocarbon specialist because they are the onshore equivalent of the oil and gas producing sediments under the sea in the Taranaki Basin. By studying them, geologists can get a clearer picture of the inaccessible sea floor sediments just to the North. 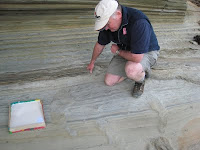 Over years of detailed observations and mapping of the Upper Cretaceous (70 million year old) rocks, he came across several places where there were unusual structures visible in the rock layers. Pondering about these for a long time he finally decided to work out for certain what had created them. He scrutinised the rocks more closely and reviewed international scientific literature, finally concluding that the shapes can only be footprints of dinosaurs. 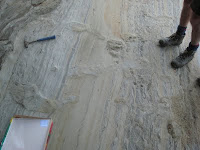 One of the reasons that the shapes are hard to interpret is that they appear on different surfaces and have been eroded out by different amounts. This means that it is hard to tell whether the differences in shape are due to erosion, to the way the creatures were walking through the mud, or because they were made by different animals. Some are rounded forms (like an elephant footprint might look) whilst others are more elongated – as if the imprint was caused by the animal dragging through the sediment with less of a stomp! 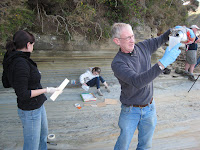 It was a fantastic opportunity to study these unique finds at first hand. John Simes and Marianna Terezow, helped by my 11 year old daughter Sophie, spent their time carefully making silicon casts of some of the best examples. It is important to get the best possible record of the prints as it is inevitable that they will be further eroded away with time.

Here are also a couple of links to the TV 1 news interviews about the discovery:
http://tvnz.co.nz/national-news/dino-footprints-found-near-nelson-3117525/video
http://tvnz.co.nz/national-news/dinosaurs-leave-their-mark-near-nelson-3117525/video
and here is a link to the TV 3 news item:
http://www.3news.co.nz/Nelsons-dinosaur-footprints-excite-scientists/tabid/309/articleID/128665/cat/772/Default.aspx