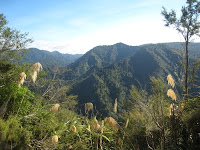 Over the last few days I have been with a GNS Science team exploring the remote Mangahouanga Stream in inland Hawkes Bay. This is the area that is famous for the discoveries of dinosaur and other reptile remains by Joan Wiffen (who died in June last year) and her team. It is on private land, deep in the forest and therefore rarely visited. Bones of marine reptiles seem to be relatively common in the hard concretions in the stream bed, but land dwelling dinosaur remains are very rare as they were washed some distance into the sea and separated before being buried in the sediments . An example of a therapod dinosaur toe bone, discovered by Joan Wiffen can be seen as a 3D image here 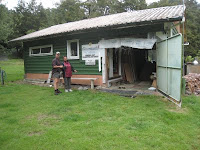 On the way to explore the river we passed the two expedition huts used by Joan’s team . In the picture are Mike Wylde and Tunis Keenan, two Royal Society Primary Teacher Fellows being hosted by GNS Science this year. 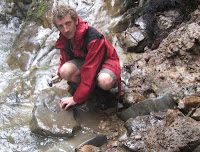 After following a rough track through the bush, we reached the Mangahouanga Stream. In several of the large boulders we could see bone remnants. In this picture there is a large vertebra (backbone segment) of an unknown species of reptile. If you look carefully at the top of the rock in the right foreground you might see an oval shaped brown lump which is another similar vertebra. 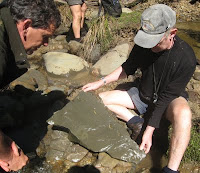