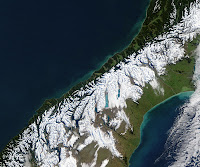 This NASA photo of the South Island of New Zealand shows the green of lowland vegetation contrasting clearly with snow in the mountains of the Southern Alps. The straight edge of the mountains is the line of the famous Alpine Fault. This fault is the boundary between the Pacific and Australian tectonic plates which are sliding past each other in this region at an average rate of about 40 mm per year. The Alpine Fault is a globally significant feature and similar in character to the San Andreas Fault in America or the North Anatolian Fault in Turkey. 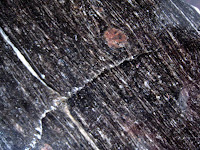 Every 200 – 400 years the plate movement is accomodated by a violent earthquake of about magnitude 8, and dislocation along a segment of the fault of roughly 8 metres. The last big earthquake rupture occurred in 1717 AD.
Most of the fault movement is sideways, but a portion of it is vertical, and has uplifted the mountains on the eastern side to reveal exposures of the rocks along the fault that have been buried and altered over millions of years. The second image shows a slice of this metamorphic rock with white streaks of quartz, black mica and a red garnet crystal that is about 5mm across. 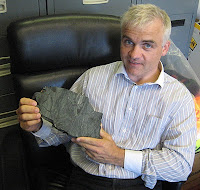 Rupert Sutherland at GNS Science is one of the leaders of the Deep Fault Drilling Project (DFDP) which is about to drill into the Alpine Fault. Many other research organisations are involved in this very large, multi year project. To listen to a short radio interview of Rupert talking about the project go here.
From next week, the  DFDP project will start by drilling two shallow (150m) boreholes through the fault near Whataroa on the West Coast. Rocks will be sampled and analysed and instruments will be left in the ground as part of a long term monitoring programme.  In future years this reasearch will be extended by drilling down several kilometres.

In the photo of Rupert he is holding a specimen of fault breccia – a bit of rock that has been fragmented by rupturing of the Alpine Fault. In the close up image you can see how the rock is broken up. The dark patches are where some of the rock was melted and then solidified again in the spaces between the fragments.