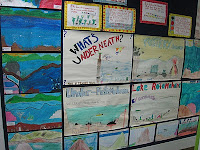 The Rotorua Public Library has a display of about 70 posters created by Rotorua school children who have taken up the challenge of the GNS Science Poster Competition. Their challenge was to represent their prediction of what the Rotomahana Project scientists will discover in the next few days in their survey of the lake.

There is a wonderful range of images and ideas of what may lie beneath the surface of Lake Rotomahana. I’m sure you will agree that it is a colourful and diverse display 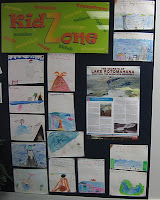 If you live somewhere near Rotorua or are passing through in the next two or three weeks, drop in for a look at the entries. The overall standard and impact of the posters is very high and shows that the children have really thought about what the scientists may find with the AUV survey being undertaken over the next week.It is going to be a tough job to choose some prizewinners! Scientists will make their choice based on visual impact and scientific accuracy in comparison with their survey results, and the verdict will be announced in mid February 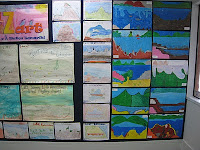 Meanwhile, the team is gathering in Rotorua, including scientists from GNS Science, Columbia, NOAA and Woods Hole Oceanographic Institution in the US, the University of Waikato, Auckland University and Bayreuth University in Germany. There is also a film crew and a couple of TV news teams coming along for some or all of the time.Tomorrow our first engagement will be a formal welcome of scientists and visitors on the local Marae.