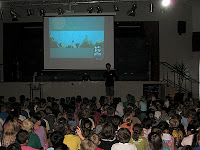 Last week I toured a number of Rotorua Schools to show slides and to describe the rediscovery of the Pink Terraces as well as other results of the Rotomahana Project. Over three days I talked to over 1100 children.
I also took the opportunity to present prizes to the winners of the Rotomahana Project Poster Competition.
The Prizes were awarded to those students who had produced the  most eye catching posters, that also most accurately predicted what the scientists would discover in the lake.
﻿

It was very difficult to choose the winners because of the high standard of the posters that had been entered. A lot of effort had gone into the children’s creations. This photo shows the engagement and interest of the children in learning about the Rotomahana Project.
﻿

The youngest prizewinning scientists each won a Rotomahana Project baseball cap, a certificate and a family pass to a guided tour of the Waimangu Volcanic Valley as well as a boat cruise on Lake Rotomahana. In this picture, Traci Benson, age six, of Owhata School is getting her prize. 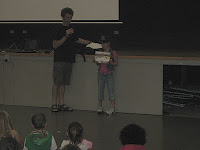 Cassandra Kiff of Westbrook School was also commended for her poster and won an award. 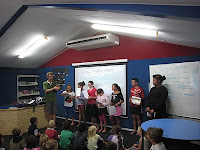 Second Overall Prize went to Rerewhakaaitu School students Paige Skipper and Mark Sinclair who produced visually outstanding  posters. They won a guided tour of the Waimangu Volcanic Valley for 30 students and teachers, as well as hats and certificates for themselves. There were many very high quality posters from this school.
﻿ ﻿﻿﻿﻿ ﻿﻿﻿ 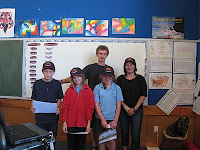 ﻿﻿﻿﻿﻿First Prize for best poster went to a trio of Galatea School students Kaya, Georgia and Breannah. Their teacher Marylou has been very enthusiastic about this project and was delighted at the success of her students. 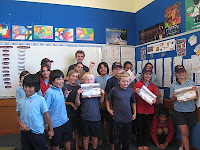 Part of the first prize is a guided tour of Waimangu Volcanic Valley and also a boat cruise on Lake Rotomahana for 30 students and adults. This class produced a number of outstanding posters and it is fitting that they will all share in the prize﻿. Well done!
﻿ ﻿﻿
﻿﻿ ﻿﻿﻿﻿