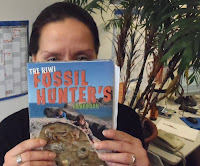 James Crampton and Marianna Terezow’s The Kiwi Fossil Hunter’s Handbook won the LIANZA Elsie Locke Award in the  non fiction category. With James away from town, Marianna attended the awards ceremony last night to accept the prize. Here you can see clearly that Marianna was one of the people behind the book! 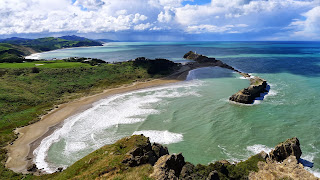 Armed with the fossil hunter’s guide, I recently went to visit a couple of the localities described within it. The first was Castlepoint, a popular spot on the Wairarapa coast of the North Island. It is a dramatic rocky promontary, enclosing a lagoon and extending out to sea. Just to the south is a steep track leading up to the top of high cliffs overlooking the bay. The spectacular coastline is a favourite spot for fishing and hiking as well as exploring for fossils. 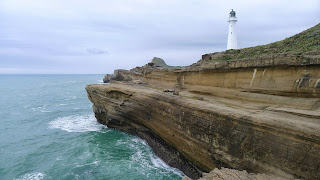 The Castlepoint Reef is jam packed with fossil fragments, indicating that it was created under the sea and has since been uplifted. The fossils have been dated at about 2.4 million years old. Because of fault lines on either side of the reef, nearby older and softer strata have been uplifted even more, and then eroded away, leaving the hard limestone of the reef to stand proud of the surroundings. The seaward side of the reef is a dramatic cliff, that would be easy to fall off if you weren’t careful. 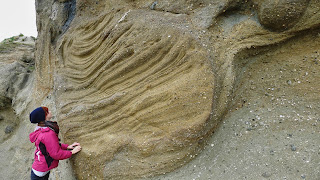 From studying structures such as slumped (buckled) beds and mixed rock fragments within the reef, geologists think that it represents the debris that accumulated in a steep sided canyon. Material occasionally avalanched down into the depths from above, mixing up fossil fragments and rocks into the sedimentary sequence. Here you can see an example of these disturbed beds, with a scattering of white fossil shells included. 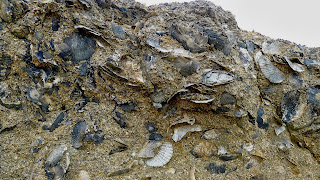 In this photo you can see that much of the reef is made up of densely packed shell fragments ( in this case clams and barnacles) that are piled up on top of each other. 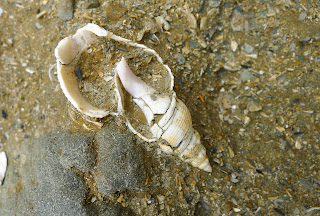 This univalve is similar to some that are found today on many New Zealand beaches.

Both cold water and warm water fossil shell species can be found in the Castlepoint reef . It is thought that at least two ice age cycles are represented in the rocks, each lasting about 40 000 years.

The fossils assemblages at Castlepoint show a mixture of deeper water species that would have lived several tens of metres below the surface in the bottom of the canyon, and shallower types that were washed down from the sea floor alongside. 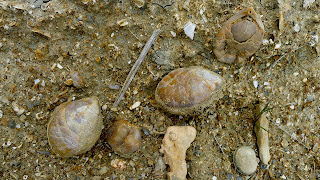 These brachiopods called Neothyris campbellica are about 5 cms long. They were filter feeders that attached themselves to the sea floor with a stalk. 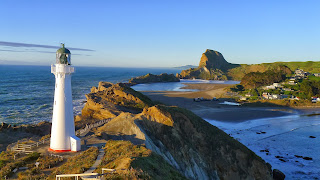 An early morning view of Castlepoint lighthouse with the Castle in the distance across Deliverance Cove.