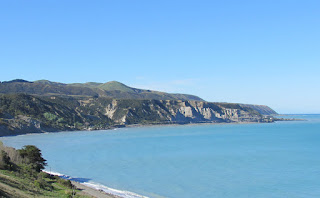 Last week I visited Palliser Bay in the Wairarapa. Along the coastline there are many exposures of mudstone from the Hurupi Formation, about 11 to 8 million years old. 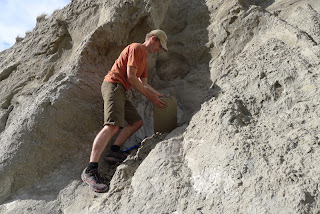 These mudstones contain abundant marine shell fossils, but are also known for occasional whale bones.  After some time searching, as luck would have it, I found a large piece of bone sticking out of the mud near the base of one of the cliffs. 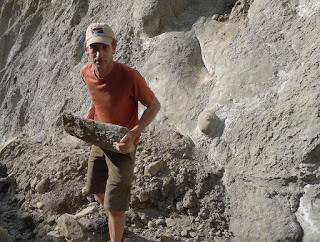 The bone was embedded in soft sediment and was easy to remove with a bit of digging. 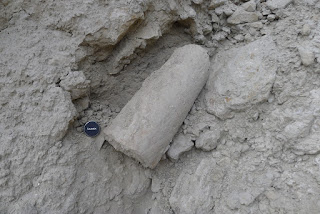 Nearby I found two other large pieces. 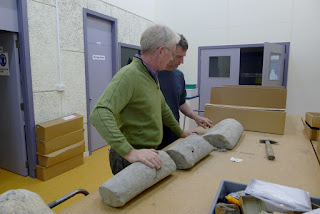 Back at GNS, Craig Jones identified them as fragments of mandible (jawbone) from a large baleen whale species. Two of the pieces matched together to give a combined length of 75 cms. Initially we thought that these are part of the left mandible, whilst the other single piece is part of the right mandible.

John Simes is the manager of the fossil collection at GNS Science. He  helped me to give them an initial clean to remove some of the mud that coated the bones. 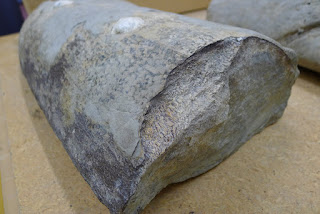 Here you can see the typical mottled texture and brown colour of fossil bone. This is the largest  piece, half a metre long and about 25 cms across. 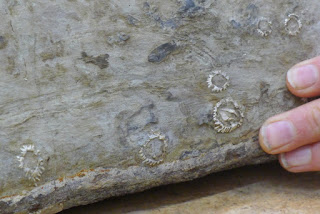 There is an epifauna of bivalve and barnacle fossils attached to the bones. This tells us that they would have been lying in calm, relatively shallow water before they were buried by sediment. There are also several wood fragments in the surrounding clay, which suggests that the whale died not far from land. 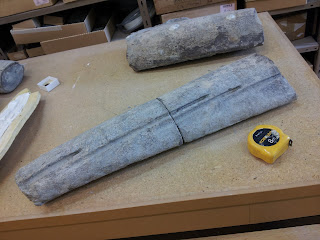 After many hours of cleaning, some interesting grooves appeared in the bones. These show where blood vessels were embedded alongside the bone.

For an update on additional whale bone discoveries from this locality check out this blog post.