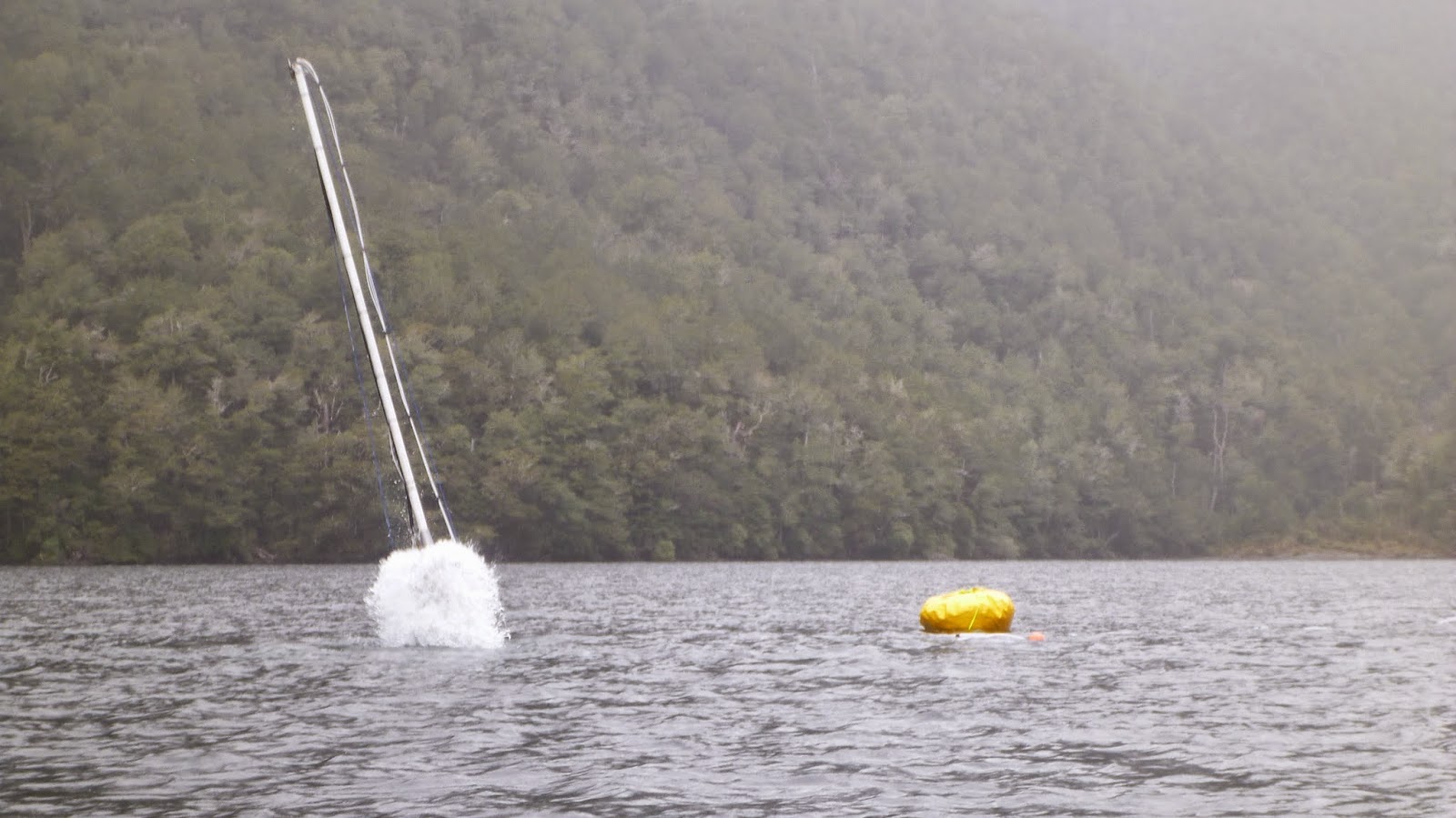 In order to make sense of the sediment cores that can be retrieved from lakes near to the Alpine Fault such as Lake Christabel, it is worth having a think about what happens to the environment when the fault ruptures in a large earthquake. 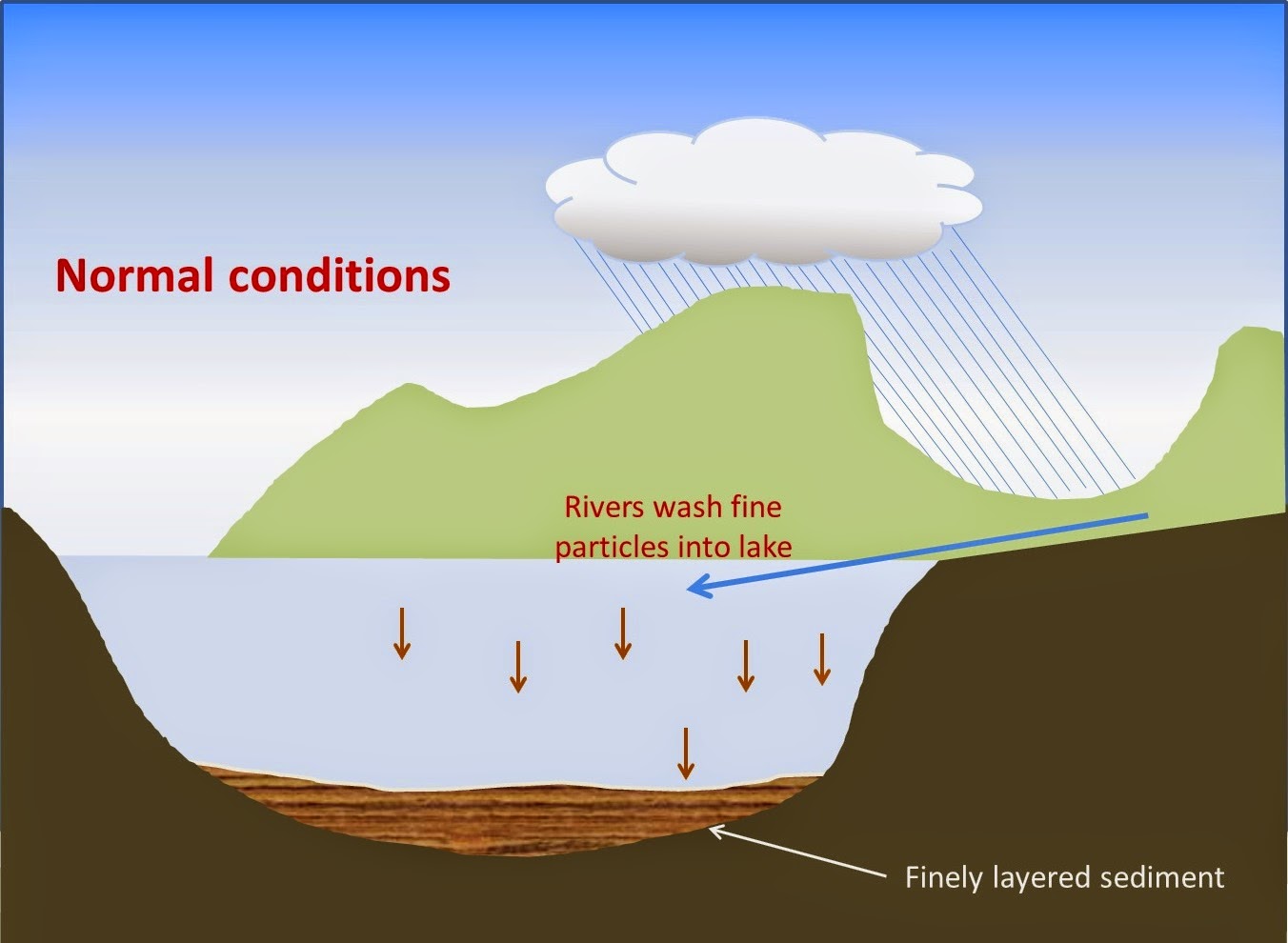 Under normal conditions, alpine lakes fill up very slowly with sediment that is fed into them by rivers. The particles settle onto the lake bed gradually, to create a sequence of finely layered mud. 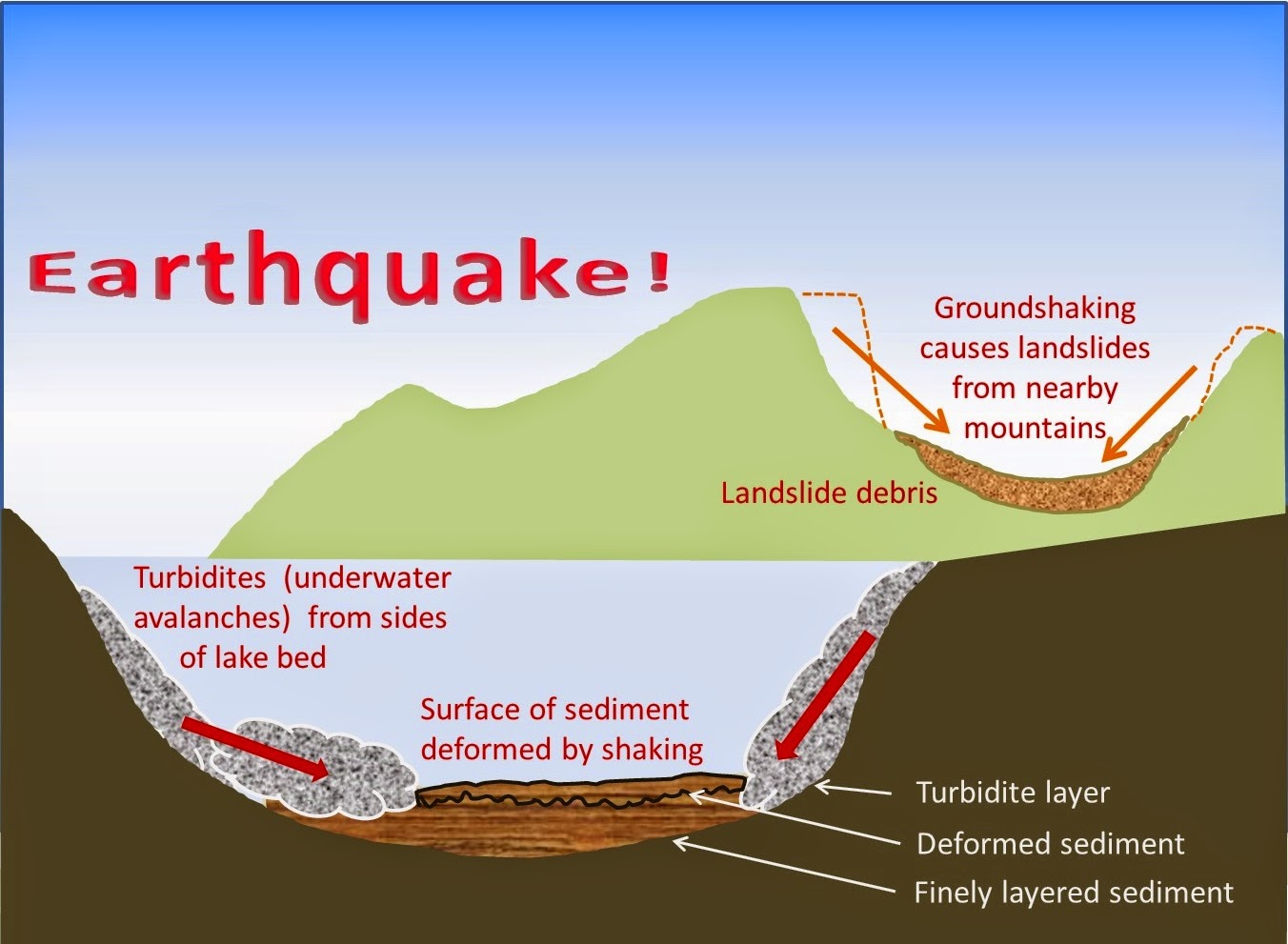 When an earthquake occurs, a number of consequences affect the landscape. The soft surface sediment on the bed of the lake gets deformed and folded, and the shallower slopes at the side of the lake collapse to create flowing avalanches (turbidites) that sweep down and across the lake floor. In the nearby mountains, large landslides occur that choke the river valleys with a chaotic mix of large and small rock fragments. 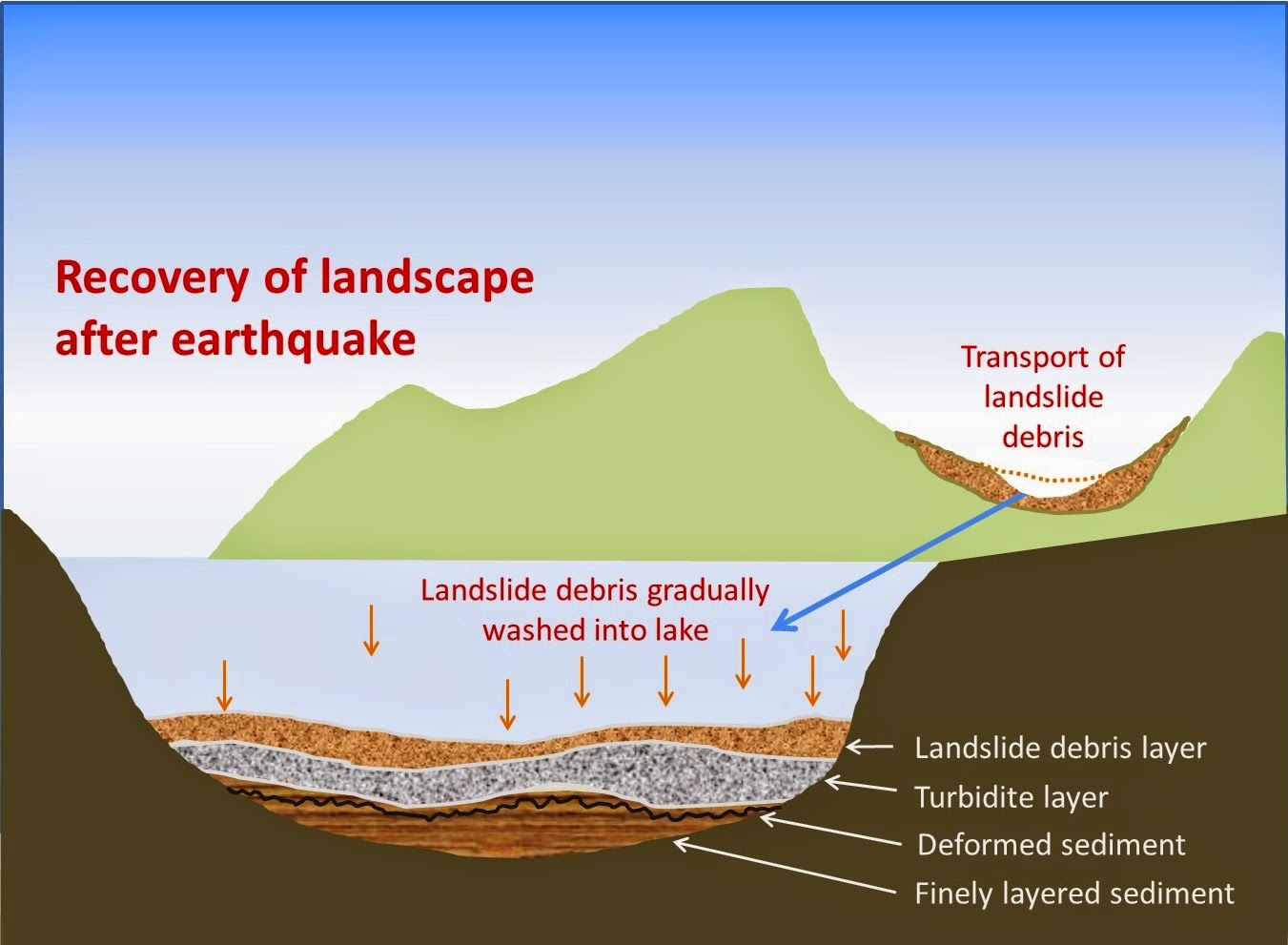 In the months and years following the earthquake, the landslide debris is gradually washed into the lake, to form a recognisable layers on top of the turbidite deposit. 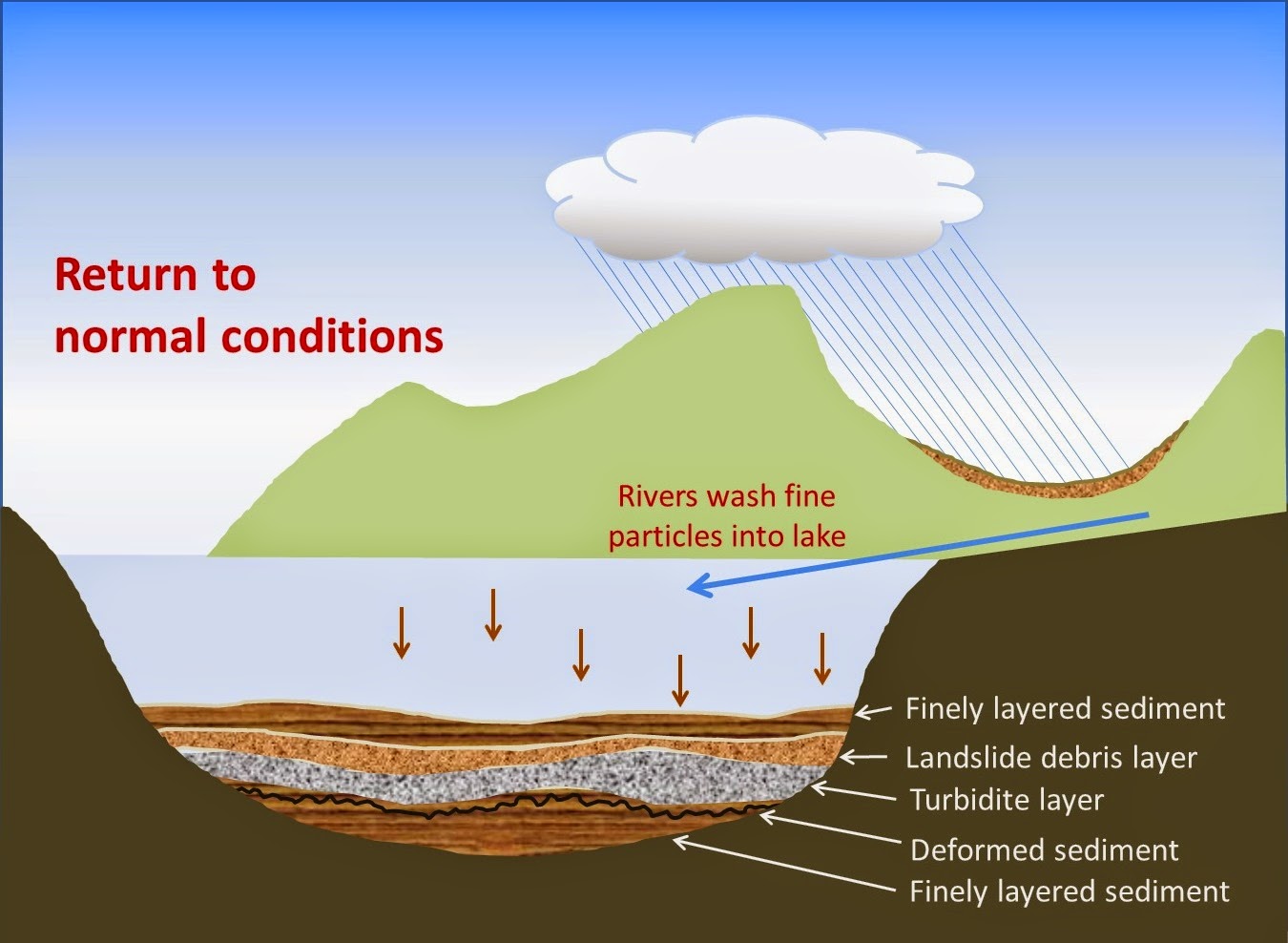 Eventually, conditions return to normal, with the finely layered sediments gradually covering over all of the evidence of the earthquake and its aftermath. It may be hundreds of years before another earthquake sttikes that is near enough and strong enough to leave its mark in new layers of the lake sediment.

Now lets have a look at the real thing – an example of a sediment core that has been retrieved from a New Zealand’s alpine lake. 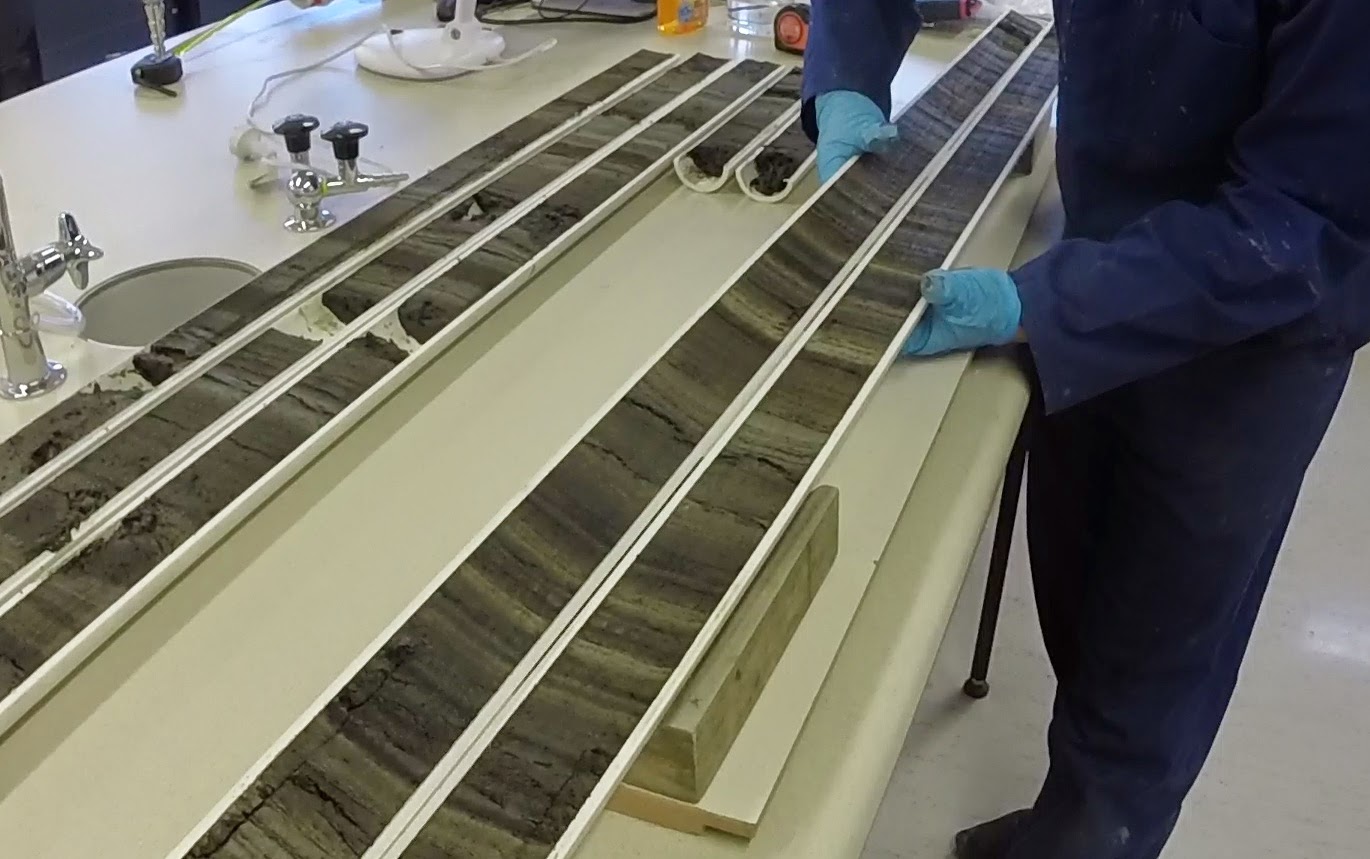 Back in the lab at the University of Otago in Dunedin, Jamie Howarth opens a core tube to reveal the layers of sand and mud from Lake Christabel. 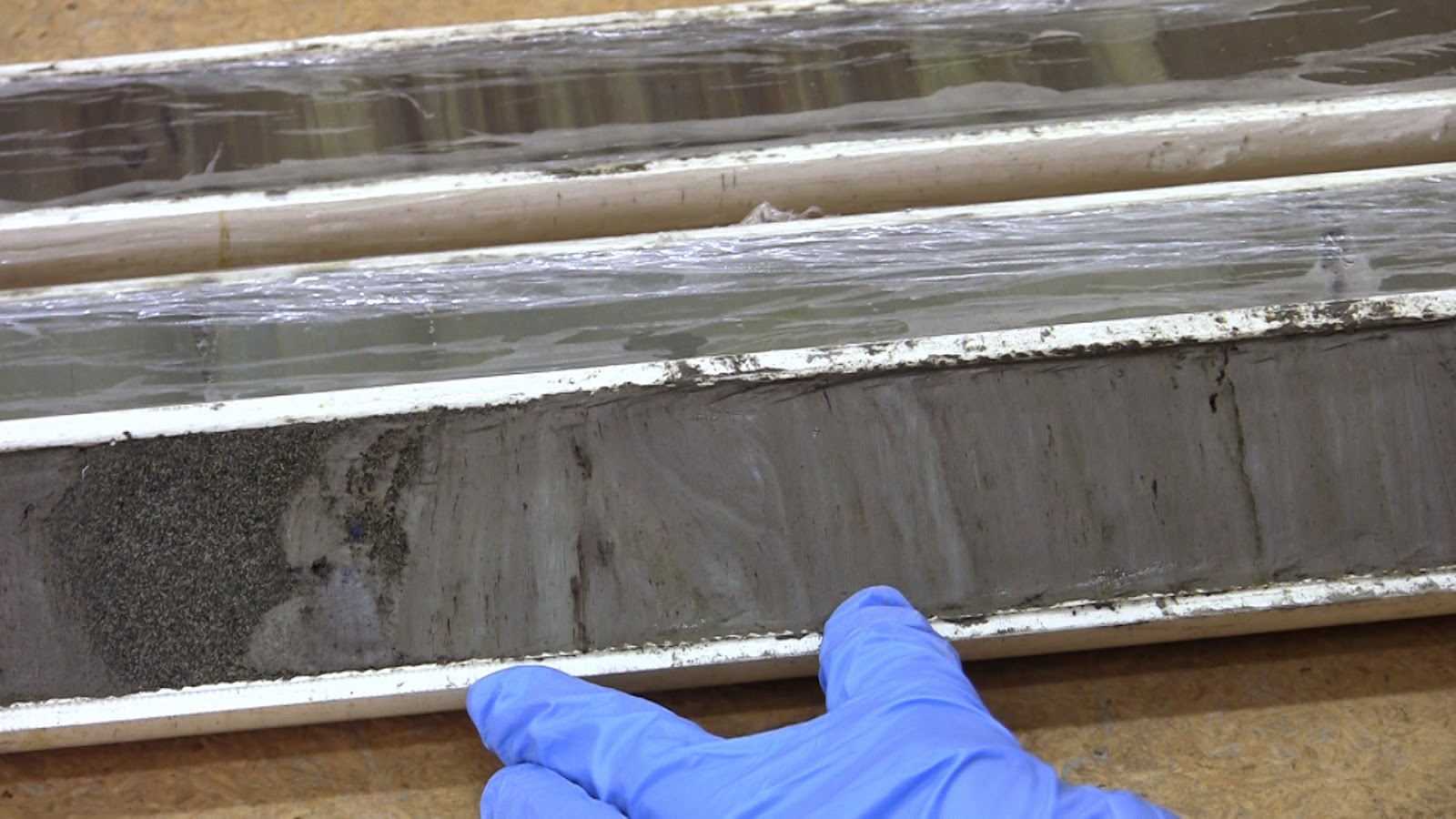 Here is a section of the core that shows the finely laminated lake sediments formed in normal conditions (on the right). In the centre you can see that the layers are slightly folded – this is the indication of an earthquake that has deformed these layers. They would have been at or just below the surface of the lake floor at the time. 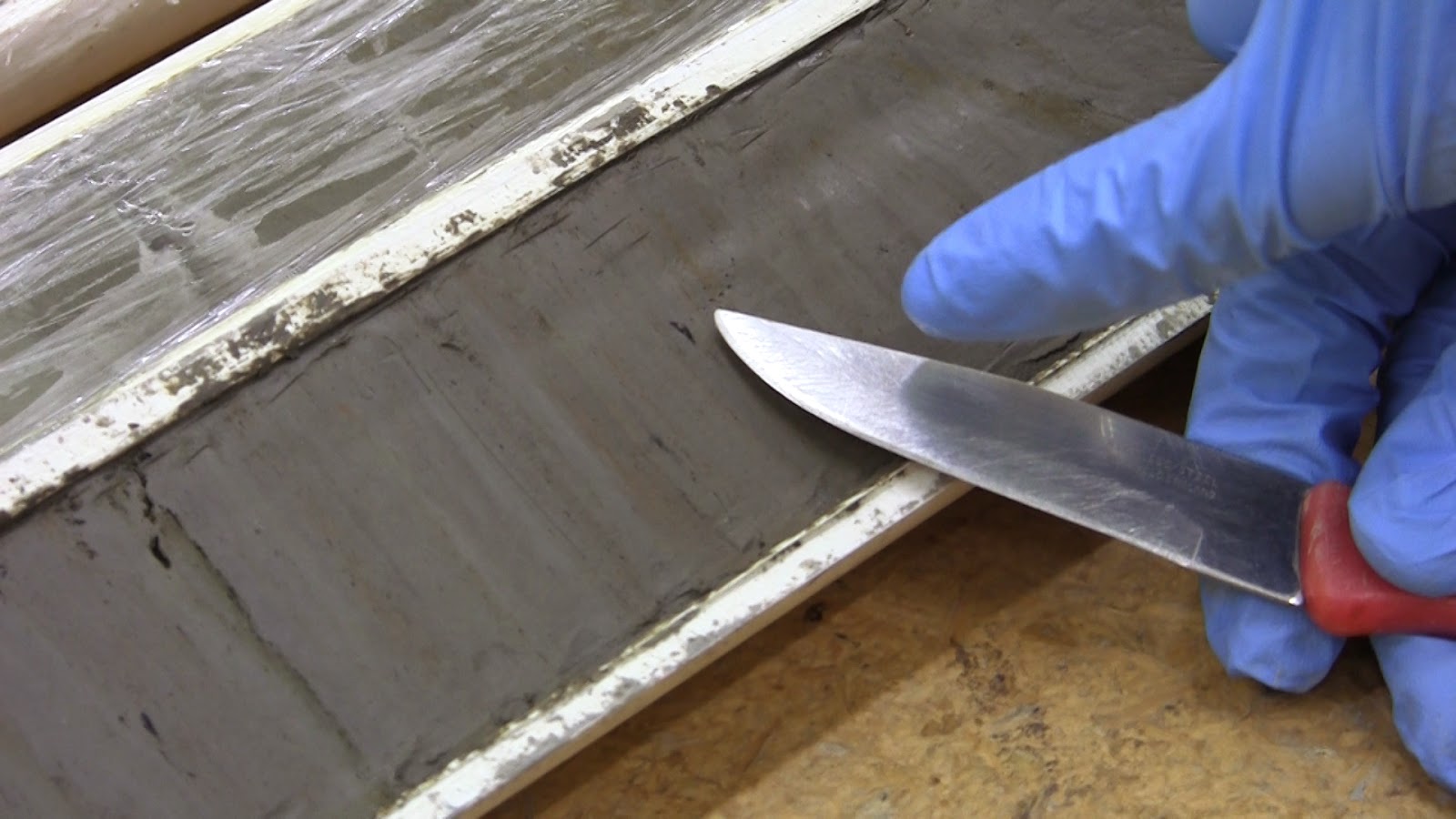 Here Jamie is indicating the remains of a leaf next to the blade of the knife. This is not far below the earthquake layer, and can be used to get a radiocarbon age which will help to date the earthquake event. 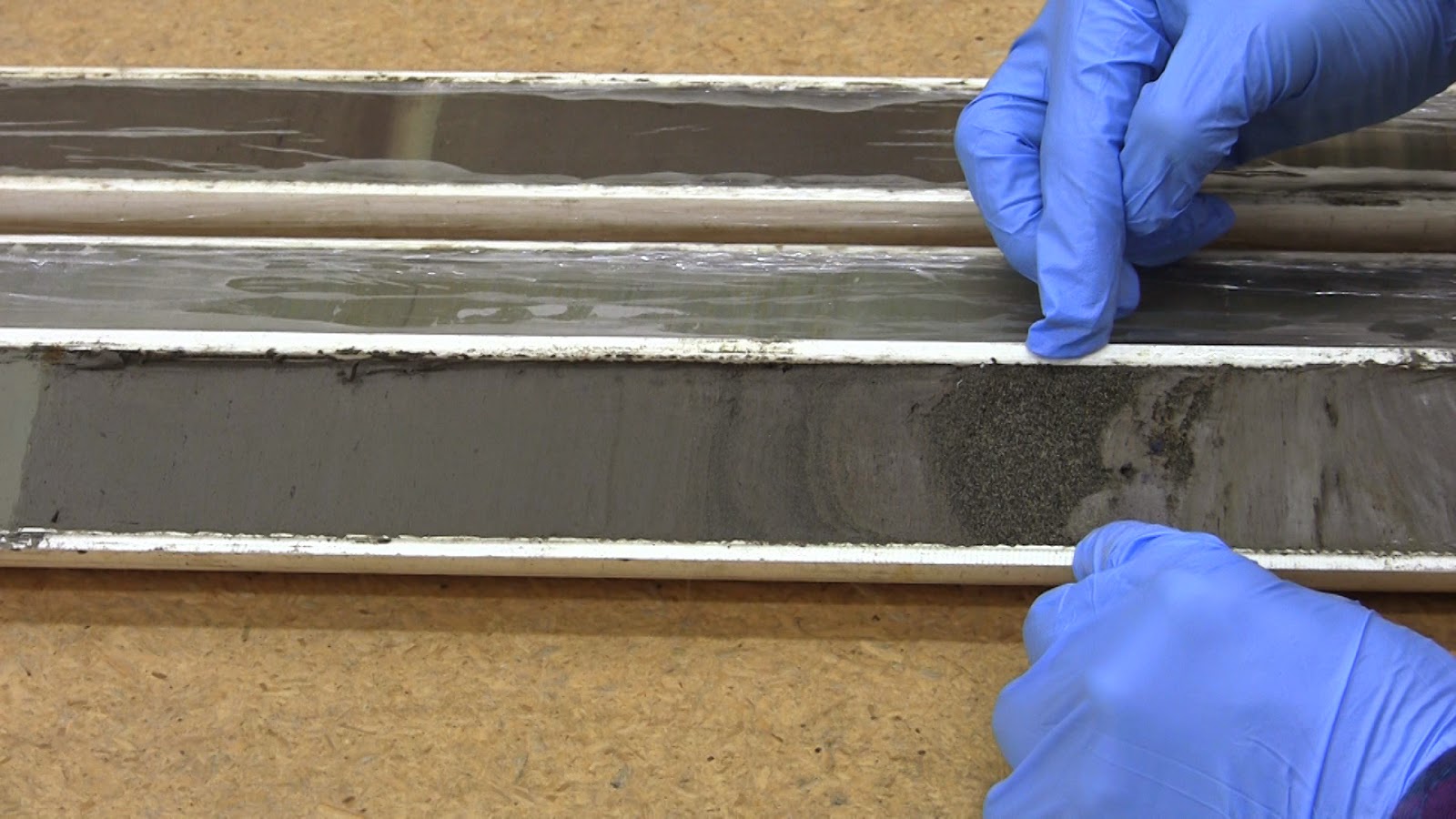 This dark coarse layer is the next layer that was added to the sequence on top of the folded sediment. It is the base of an earthquake generated turbidite deposit. The material gets gradually finer to the left (‘upwards’) as the cloud of particles slowly settled onto the lake floor. 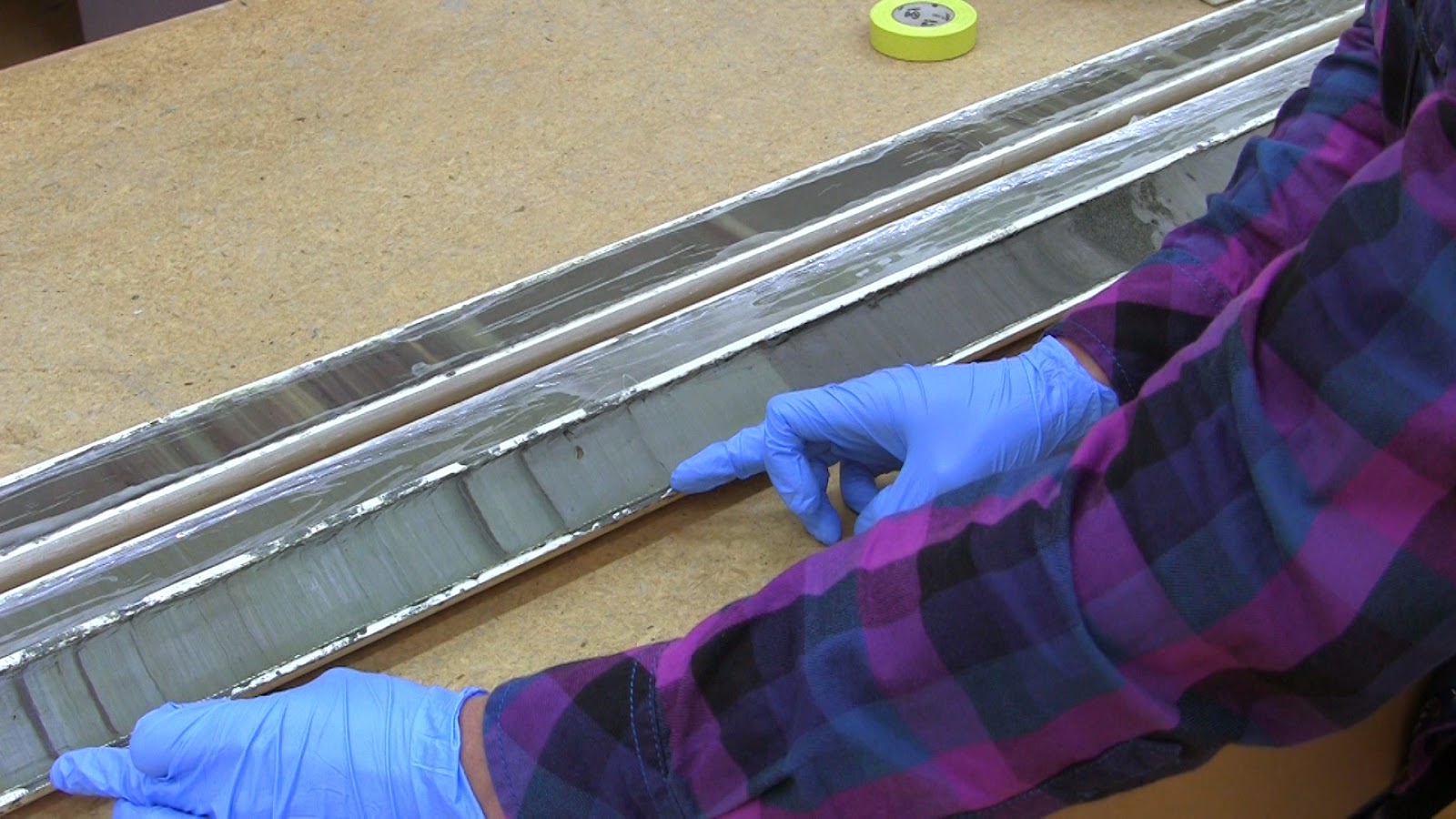 The section shown here is the landscape recovery phase. Dating of the base and top of this layer in several cores has shown that it can take 50 years for the landscape to recover from an Alpine Fault earthquake. During that time, hillsides are destabilised, debris flows cover flat areas near to the mountains, and rivers are prone to changing course due to being overloaded with sediment. 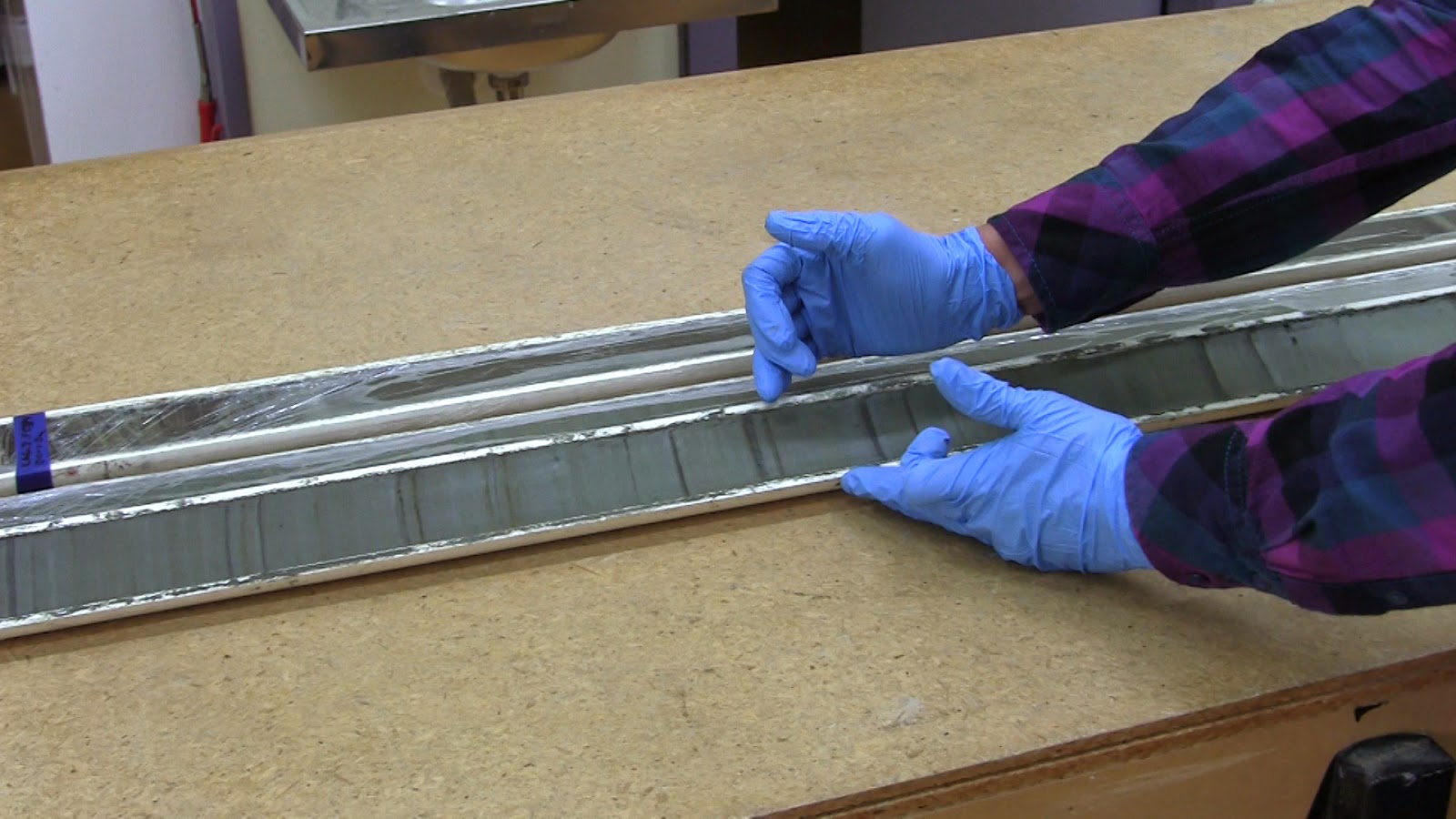 Finally we see the thinly layered sediment  indicating that normal conditions have returned to the lake environment. 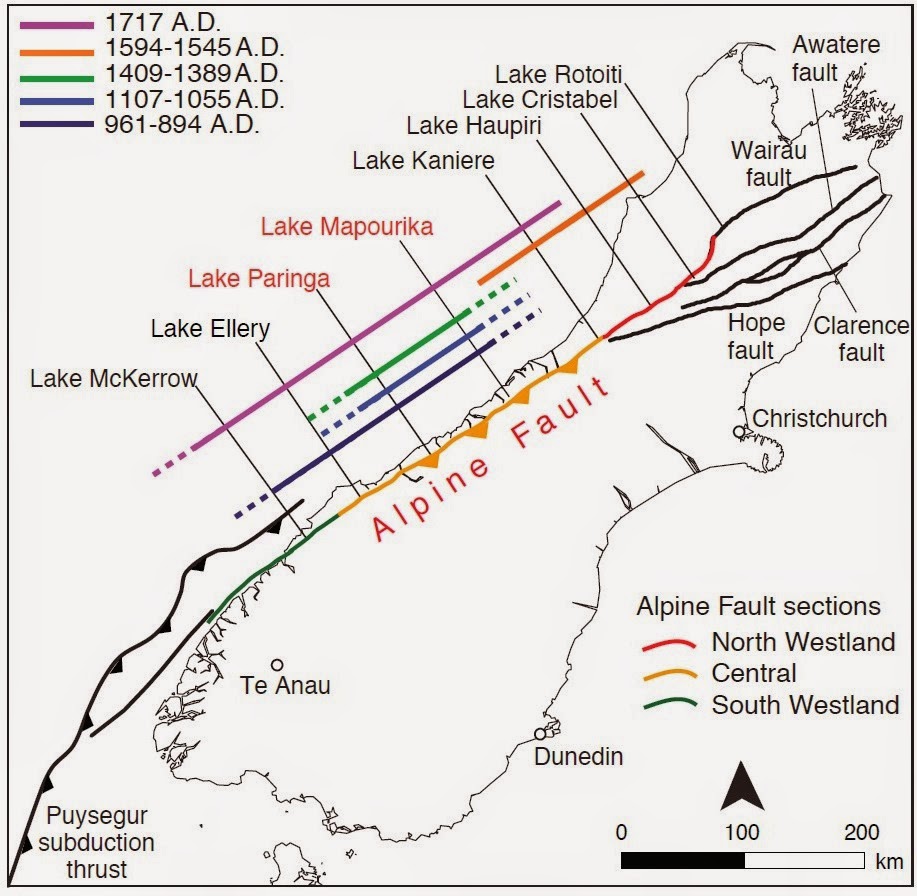 This map shows what can be done when this research is carried out at a number of lakes along the Alpine Fault. The coloured lines (purple, orange, green etc) show earthquake records that have been identified so far in some of the lakes along the length of the fault. You can see that the last earthquake rupture (in 1717 AD) was over 300 km long. The one prior to that around 1600 AD ruptured the northern end of the fault. Information about previous earthquakes is still incomplete, but the picture is starting to become clearer. With more research, Jamie and his colleagues will be able to show a more detailed history of the last 10 Alpine Fault earthquakes including the dates, lengths of rupture and magnitudes of the events.