GNS Science, in partnership with a team from the University Gadjah Mada (UGM) in Yogyakarta, is involved in a 5 year project to reduce the risks caused by natural disasters in Indonesia.

Indonesia is a huge and very diverse country, made up of about 20 000 separate islands, with a total population of 250 000 000 people and hundreds of different local languages.  A very active plate boundary running alongside the country, along with its complex topography means that  much of Indonesia is susceptible to earthquakes, tsunamis, landslides, floods and volcanic eruptions. 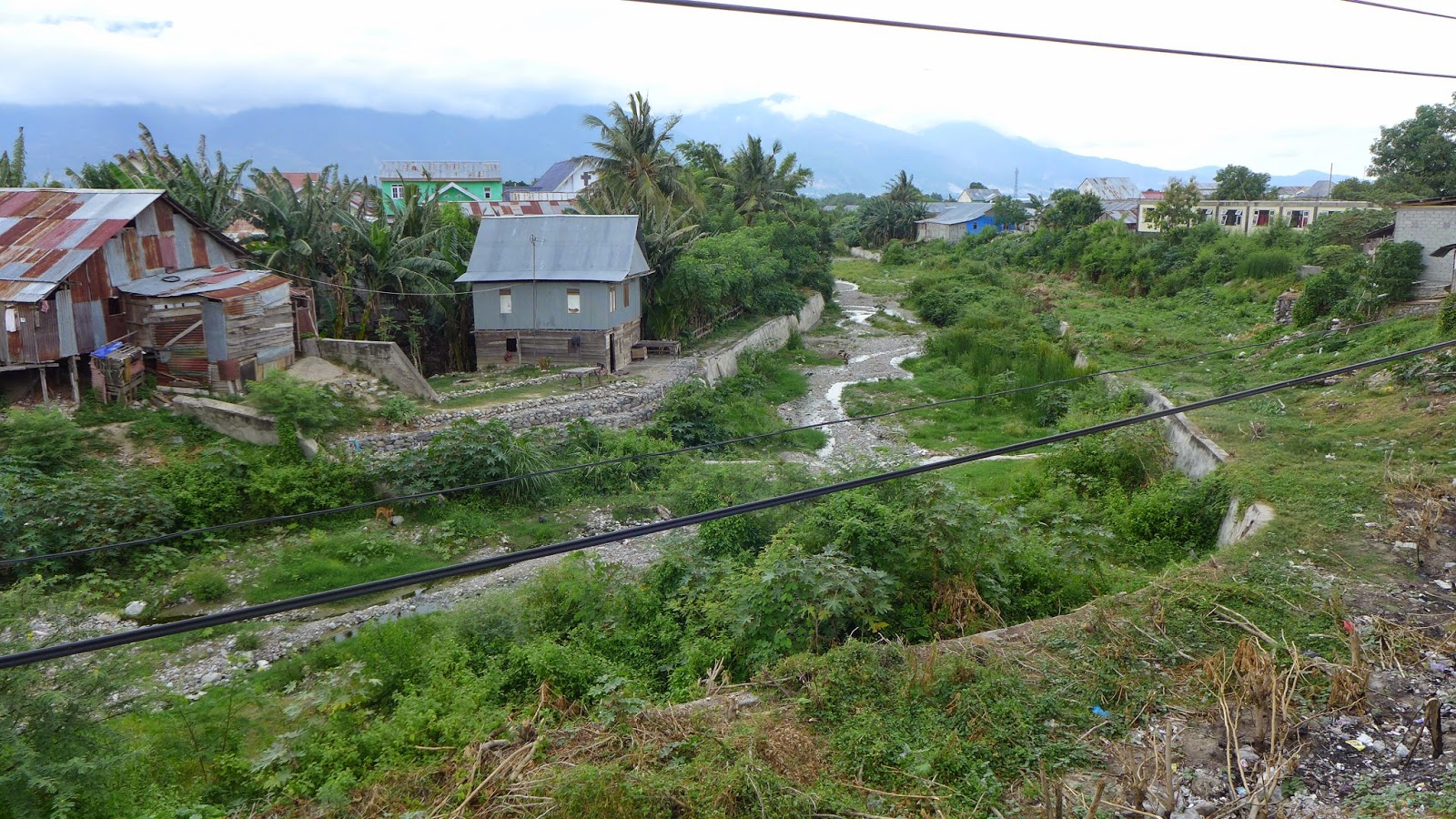 Population pressure forces many people to live in areas that are highly vulnerable to these hazards, such as coastlines, river banks and on the slopes of volcanoes. This small river in Palu, Sulawesi, can become a raging torrent in heavy rain. Several houses on the right bank were washed away in a flood some years ago, and yet people still live right next to the river on the opposite bank. Another disaster waiting to happen?

In recent years some of the major natural disasters in Indonesia include the 2004 tsunami that devastated Banda Aceh, as well as several subsequent damaging earthquakes.  The Strengthened Indonesian Resilience – Reducing Risk from Disasters (StIRRRD) project aims to bring different agencies together in Indonesia to better prepare people and infrastructure from future such hazardous events.

New Zealand has similar geological and environmental conditions to Indonesia, but a much smaller population. It is a much simpler matter for organisations in New Zealand to work together on common issues relating to hazards. For example science, engineering, planning, environmental management, civil defence, NGO and government agencies can share information to assist decision making processes around disaster risk reduction (DRR). This integrating capability and experience is what New Zealand can contribute to assist a larger more complex country like Indonesia in such a project.

I joined the GNS Science team recently on a visit to some of the districts in Indonesia that are participating in the project.

Over two weeks we travelled to Palu and Donggala (Central Sulawesi), Mataram (Lombok), and Bengkulu and Padang in West Sumatra (see project map here). We were involved in meetings and workshops with people from many agencies, and also went on several field trips to look at different environments and projects.

In this video, Michele Daly from GNS Science, and Faisal Fathani from UGM, give and outline of the project:

Here are some images from the field trips:

An active fault runs up the cliff between the brown coloured sandy rock on the left and the pale grey limestone on the right that has collapsed in a large rock fall. This is near Donggala, Central Sulawesi.

A year ago the village of Gol in Lombok was almost totally destroyed in an earthquake that lasted a few seconds. This newly rebuilt house stands next to the broken ruins of its predecessor that have yet to be cleared away.

This sea wall on the coast of North Lombok was built to protect the village next to it. Within a year of construction it was breached in a big storm and many houses were severely damaged.

This massive concrete structure being built near Bengkulu in West Sumatra is a tsunami vertical evacuation building. When completed it will be used as a community centre, with enough space and supplies on the top level for about 2000 people to escape from a tsunami at short notice. This example shows how the Indonesians are taking on significant Disaster Risk Reduction initiatives.

For more information about this project and to be in touch with updates have a look at the StIRRRD Blog or ‘like’ the project on Facebook.