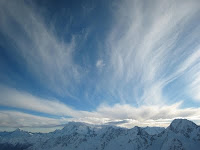 After yet another day of sorting out and preparing our gear, the weather forecast looked quite promising for a few days. We decided to fly back up to Mount Hutton and drill non stop until we either came to bedrock of had to stop for other reasons, such as water in the ice.

The four of us -Xinsheng, Dan, Uwe and myself, again flew up to the peak. It is a spectacular location with steep drop offs falling hundreds of metres down on all sides. Once up there you are committed! A sky of whispy clouds stretched above Mount Cook .

Our heli put us safely on the landing spot, with our emergency survival gear (tents, food and extra warm clothing). This is standard procedure just in case something prevents the second load from being delivered – a sudden change in the weather or problems with the heli. 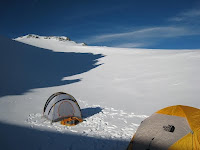 Whilst the other three went up to the drill site (the same place that we had drilled our 10 metres core already), I walked across to a beautiful horizontal scoop in the snow that we had chosen for a campsite. Although the weather was sunny and calm, I made sure that the tents were well attached to the ground with snow stakes and shovel loads of snow on their snow flaps. We wanted to be able to go to bed very late without worrying about a change in the weather.

By about lunchtime I could hear the humming of the generator at the site about 200 metres away telling me that the drilling had started. Once finished with the campsite I walked up to the others, feeling the effort more than usual due to the altitude.

The drill site was now top notch. We had an upgraded snow wall to keep the wind off us, the drill pit was enlarged and the hot plate was on, melting snow for hot drinks and food. Uwe had decided to start a new core right next to the previous one to see if we could get a better quality first 10 metres that was less broken into sections than the first had been. 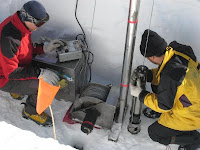 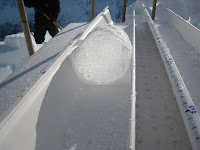 Progress was very good, with no technical problems. The ice was mostly very bubbly glacier ice, immediately below this year’s winter snow. At the top there was a distinct layer of small pebbles and grit, but below that we saw little evidence of summer dirt layers. Sometimes there were clear areas in the ice, suggesting melting and re-freezing, but we found it difficult to interpret the age of the ice or what its features were telling us. Is it a remnant of old ice or all quite recent? Only the later analysis will tell. Uwe was measuring the ice temperature in the cores, which stayed consistently below freezing at about – 3 deg C. This was very promising! We had never drilled ice below 0 deg before. At last we had found some accessible cold ice in the Southern Alps!

Once the routine of drilling and bagging the cores was established, there was time to look around, take pictures and chat. As the drill gets deeper, it takes longer and longer to winch up the core each time. 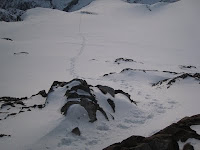 I took advantage of the opportunity to take an ice axe and climb the short distance up to the summit for a view from the top.Taking care not to slip I peered down the East face – a very long way down! After a few minutes I carefully cut steps back down off the summit to rejoin the others. The photo shows my tracks from near the top and you can see the drill site and our tents in the distance 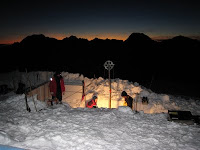 Just around 9pm we started to find bits of gravel in the ice cores at about 33 metres depth. Then suddenly Xinsheng said “Is finished!” – We could hear the drill clunking against rock down below in the hole. The first ever New Zealand ice core drilled to bedrock had just been drilled, a humble 35 metres from the surface.