Today we flew up to our highest planned drill site on Mount Hutton. Yulan stayed behind, and with us instead were Tom McRae and Ron Madden from TV1. Because of the prospect of poor weather forecasted for tomorrow, we had decided to do a rapid reconnaissance drill only. If the results proved to be good we would come back with a better weather window to drill deeper. 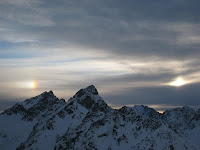 Mount Hutton is relatively remote – on the eastern side of the Park in the Liebig Range. We hoped that with the higher elevation and the location some distance away from the main divide, we would get a better preserved and longer climate record. Our radar survey showed a depth of only 50 metres of ice, but perhaps 50 metres of thinner layers would be as good as 100 metres of thicker ice further to the West (such as on Annette Plateau). 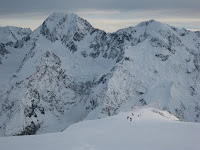 The flight up was spectacular the icy clouds producing a nice sundog spectrum .

Mount Hutton has a small glacier on top. It has a ridge running straight up the middle, and our drill site was about 3/4 of the way up the ridge from our landing site at the bottom. I went a head with Uwe to find our spot and start digging in. The winter snow was only 1.5 metres deep here (as opposed to 4 metres on Annette Plateau) 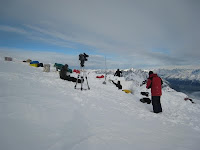 Tom and Ron were interested in what we were attempting, asked lots of questions and interviewed us for their news programme. When they left at about 1pm, Dan went down with them, leaving Uwe, Xinsheng and myself. By 4pm we finished drilling having got down to 10 metres, with very nice, bubbly glacier ice immediately below the top surface snow.

The heli arrived and flew away with the net load of gear, then returned half an hour later to pick us up. The evening light was beautiful across the big peaks of the Southern Alps.