By 9am all was set for drilling to start 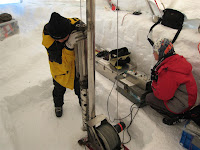 Having dug a pit about 2 metres deep into the snow to find a hard layer for the drill to stand on securely, we were still another 2 metres from the previous summer surface of the glacier that was now under a total of 4 metres of this winter’s snow.
This is how we drill the ice cores: 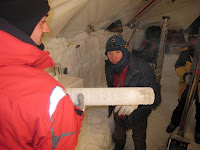 It is fascinating to watch the way Xinsheng operates his drill. First he makes sure it is aiming exactly straight down by holding onto the motor while the drill barrel cuts its way down into the ice. Initially the rotating core barrel is at the surface, but soon he will hold onto the wire line to feel how the drill is cutting down deep in the drill hole. After a certain distance has been drilled – usually just less than 1 metre, the power gauge on the control box shows that the motor is starting to struggle. Xinsheng then tells Yulan to stop the motor, gives the wire a few sharp tugs to break off the core from the ice below, and then Yulan switches on the winch motor to haul the drill up to the surface. The drill barrel is then detached from the motor, and the ice core, along with a mass of ‘chips’ is pushed out of the barrel onto a core tray. 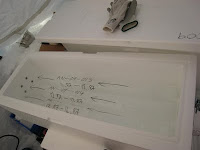 One of us measures the core, matches it with the previous section and cuts it to fit it into the 1 metre ‘layflat’ polythene bag that is already prepared and labelled. The core then goes into an ice core box, with all necessary details noted into the field notebook.

There are quite a few technical issues that can slow down the drilling process. The quality of the ice can change, and sometimes faults develop with the drill itself. Xinsheng has an amazing ability to remedy these pitfalls – I was impressed watching his resourcefulness as we progressed
So here on Annette Plateau, our first drilling was going well. There were several dust layers in the core at intervals, most likely suggesting summer layers where melting at the surface had concentrated wind blown dust into a distinct deposit. 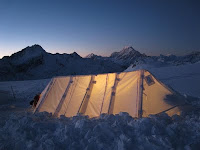 Progress was good. Apart from a short wet layer at 29 metres, the ice was looking cold and bubbly – good quality glacier ice. We continued drilling until 11 pm by which time we had reached about 40 metres below the surface.