By 8am we were all at the airport loading a huge pile of supplies into a sling net for the helicopter to take up to the Annette Plateau. 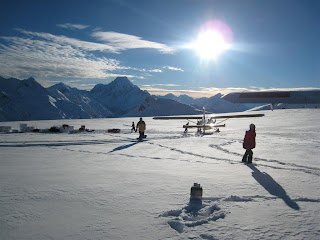 I went up with the first flight with the job of pointing out our chosen drilling location to our pilot Brendan. Unfortunately the GPS co-ordinates were wrong (!) so I had to make a best guess using the footprints of the radar traverses which were still visible. After landing and unloading the net, the heli flew away leaving me with the mountains, the glacier, the sun and the silence – for a short time at least. I started to sort out the gear and soon two planes landed beside me, with the rest of the team and more gear on board. After we had unloaded, a short walk around the area showed that my judgement of the drill location was about 80 metres out so we had to drag the gear pile to the correct position. 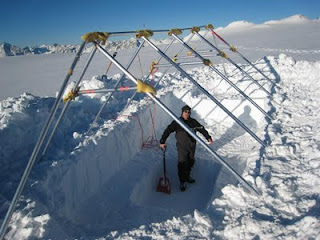 The day was spent putting up the drill shelter and digging a snow pit under it’s protective cover. We also put up the tents and organised the equipment to start drilling the next day. 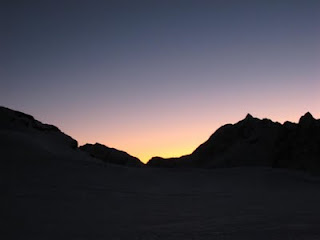 It was a beautiful clear night when we turned in, with a bracing minus 12 degrees C discouraging prolonged stargazing….