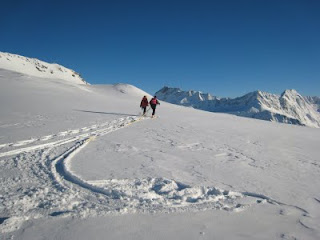 Today I jumped into a helicopter with Lawrence Kees and Alice Doughty from Victoria University Wellington. We flew up to the Annette Plateau to do some further radar work. I took the opportunity to test the snow conditions for securing tents and see if there were any possible snow caving sites nearby as a back-up. 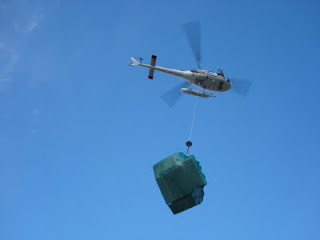 I dug a snow pit about two metres deep and then used my avalanche probe to feel deeper down. It was mainly soft snow with a few slightly denser layers. At about 4 metres deep I could feel the hard ice of the last summer surface. This means that in order to secure our tents against very strong winds we will have to use lots of ‘deadmen’ – large sacks filled with snow and buried to act as anchors. Tent pegs – even snow stakes would be no good in these conditions.

This Photo shows Lawrence and Alice setting of to traverse up and down to complete the radar survey, I took a walk around the edge of the glacier to see if there were any suitable sites for snow caving. I was looking for steep angled snow slopes of drifted snow at least 2.5 – 3m deep. By probing around I found a good spot that was within about 2 – 300 metres of our intended drill location. This was great – it was a reassuring safety back up for our accommodation on the mountain. 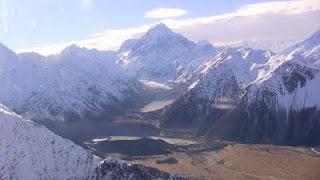 The helicopter returned to collect us at about 1 o’clock. It was carrying a sling load off ice core boxes. Uwe had obviously decided that the weather forecast was good enough to go ahead with the drilling from tomorrow. The short flight back to the airport gave us a spectacular view of Mount Cook seen up the Hooker Valley. When I got back to the Lodge, the team told me about the improved weather forecast for the next week. Action Stations for tomorrow!

Paul left as planned to go back home to the US, leaving five of us: Yulan, Xinsheng Dan, Uwe and myself to make up the drill team. If all goes according to plan, we will be up on the Annette Plateau for several days and I will tell you how we get on when we are back down in civilisation again.