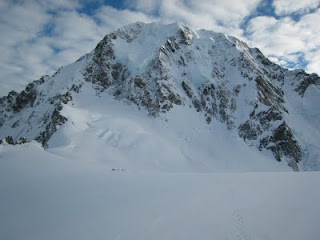 Out of our original top 3 favourite glaciers to check for ice cores there was still one left to go. This was the Baker Glacier, visible clearly from our previous site on Mount Hutton, almost directly across on the other side of the Murchison Glacier Valley.

Baker Glacier is relatively low altitude at 2360 metres. None the less, because it is also east of the Main Divide, it will have relatively low accumulation rates and, with a depth of about 70m, potential for a longer core than we got on Mount Hutton. However the radar images showed a very strong reflector at about 30 – 40 metres, possibly due to the presence of water or rock debris about half way down, a potential indicator of trouble ahead.

By now we had our gear preparation down to a tee, and were set for another blitz approach to get in and out before impending bad weather trapped us in.

We flew in to the upper part of the Baker Glacier, directly opposite the imposing cliffs of the East Face of Malte Brun. Almost immediately an ice avalanche rumbled down the face, I guess as some sort of greeting to us. 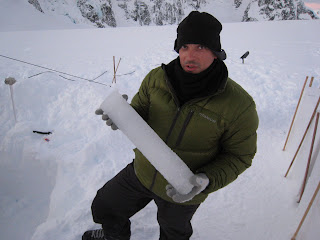 Within a couple of hours the drill was set to go and the tents were in place. 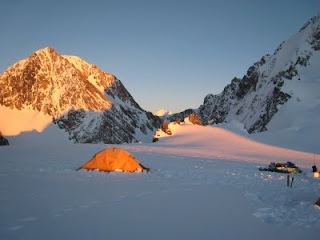 After getting past the initial surface snow, we were soon pulling up nice quality ice cores, full of air bubbles trapped within a matrix of ice. As usual, Uwe helped Xinsheng at the drill control box and I worked with Dan bagging, labelling and packing the cores. Evening fell whilst we continued working, expecting to go on until the early hours, all being well with the ice. However at about 8.30pm, with 30 metres of core recovered, we suddenly started getting wet ice again. The strong reflector layer in the radar images was explained. One further drill section confirmed that the ice was getting wetter and Xinsheng again called a halt to the drilling. We were to get some sleep after all. In the photo, Dan is holding the final section of ice core that we drilled.

We decided to pack up as much as possible in order to make a swift departure in the morning. Once the net load was more or less organised, we got out the dice and played a game of Zilch, sitting on ice core boxes with our head torched on.

During the night occasional avalanches roared down the cliffs in the dark. A beautiful sunrise lit up the scene as we got ready for our final helicopter ride down to the valley floor.