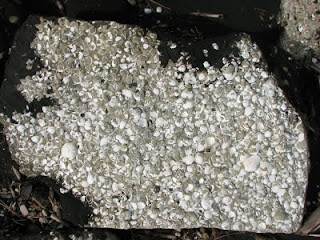 Today I am on a fossil hunting tour to check out some of the best fossil hunting sites in the North Island, along with James Crampton and Marianna Terezow. They have been writing a book for New Zealand fossil hunters and we are giving the locations a final check to make sure the details are correct in the book chapters.

Our first location is Ototoka Beach, about 20kms west of Wanganui. 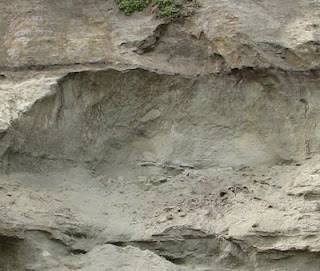 This location is great for fossil collecting. The cliffs are jam packed with shells of different types. They are relatively young, about 2.4 to 1.5 million years old, and most of the species can still be found alive today.

What is particularly interesting about this locality is that you can see changes in the sediments as you look up the cliffs. The fossils and rock types indicate changes in water depth occurring in cycles. These are sea level changes that have been shown to be due to climate cycles (ice ages) and reflect the accumulation of ice on land (low sea levels) alternating with with deeper seas when the ice melted during the interglacials. over 45 of these cycles have been recognised from the rocks in this part of New Zealand. 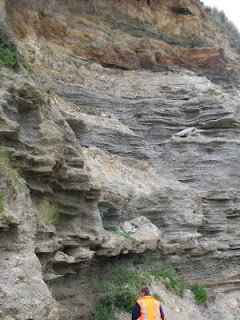 As we looked over the rock beds we could see some thin layers of lignite (poor quality coal) about 5cm thick. (see as a thin dark horizontal band about 3/4 of the way up this photo) These would have formed in a coastal swamp environment.

Further up the cliff there were beds of shells showing that the sea level had gone up, and above them were mudstones indicating a water depth of perhaps 50 – 100 metres. Scientists are able to make these estimates because similar shells are still living and are therefore able to be used for direct comparison. This has made the Wanganui area a world class geological site for studying global sea level change.