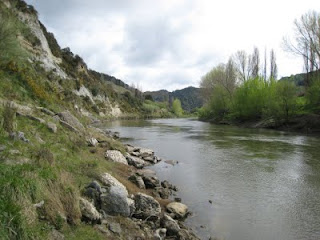 Today we went to two more fossil localities on our journey northwards in the North Island.

First up we turned off the main highway about 16 kms north of Wanganui city and travelled along a gravel road beside the Whanganui river for a few kilometres. 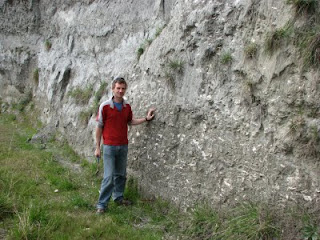 We parked up beneath some cliffs alongside the road, known to geologists as a great place to see the “Wilkies Shellbed”.
It consists of a thick sequence of densely packed fossil oysters, that were living about 2.5 million years ago. There are also other fossils to be found, but the oysters predominate and must have been part of an enormous oyster bed. They would have grown on top of earlier, dead shells, gradually building up the thick sequence into a large oyster reef. The same layer can be found over an area about 50kms across! 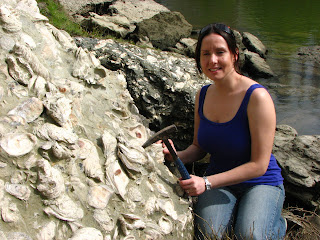 The photo shows Marianna next to a rock made up almost entirely of the giant oysters. 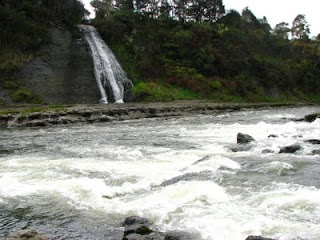 top number two was further north again. We followed state highway 4 all the way up past the volcanoes to Taumaranui, where we turned off to meet the Whanganui river again at Paparoa Rapids. Right beside the river, about 50m downstream from a waterfall on the opposite side, we found some beautiful large fossil shells. The whitish colour stood out from the surrounding grey rock, making them relatively easy to find. 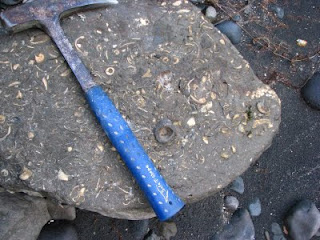 These rocks are a bit older than the Wilkies Shellbed, about 11 to 13 million years old. They were laid down in fairly shallow water perhaps 20 – 50 metres deep, that covered a large part of the central North Island at the time, well before the volcanoes existed.
In the photo here, you can see some shells as well as a dark tube shaped fossil which may be a piece of wood or the lining of an animal burrow. We weren’t quite sure from a first inspection.
Tomorrow we head further north again to hunt more fossils.