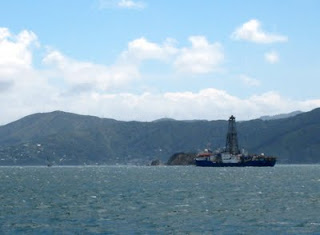 Recently the ocean drilling ship JOIDES Resolution visited Wellington Harbour for a brief one day stop-over before heading out to attempt several drillings in the sea floor off the Canterbury Coast.

I had the opportunity to visit the ship and be shown around by GNS Science’s very own Greg Browne. He is one of the science team on board for the drillling expedition. The main purpose will be to study the interrelationship between climate, sea levels and the uplift of the New Zealand landmass over the last 30 million years. 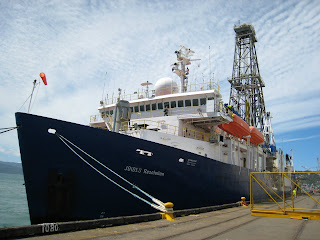 The ship is specially designed to remain in a stationary position on the sea surface whilst the drill operates. It achieves this by having a series of computer operated thrusters (propellers) which are positioned to push the ship in any direction to counter the effects of wind, waves and currents.

Once sections of sea floor sediment are pulled up from the drill hole, they are analysed in detail using a large variety of sophisticated methods. This is very similar to the way the ANDRILL programme has gained sediment cores from underneath the Ross Ice Shelf in Antarctica (- See my ANDRILL blog from 2006 here )

Greg led us on a tour of the labs, cafe, sleeping quarters and the bridge. If you would like a look around, check out this video from the visit: 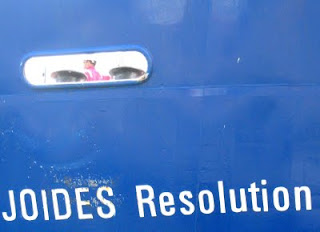 The JOIDES Resolution will be returning to Wellington in early January.

At GNS Science we are organising a holiday programme “Discover Ancient Worlds Hidden Beneath the Ocean Floor”. It is an opportunity for 12 – 15 year old budding scientists to be involved with lots of interesting hands on activities. It will be based in Wellington and runs from 5th – 13th January.

Participants will have special permission to tour the ship whilst it is re-provisioning for the January – February expedition to Antarctic waters. For more information and details of how to join the programme have a look here.