Palliser Bay is an isolated sweep of coastline about 2 hours drive from Wellington. It is separated from New Zealand’s busy capital city by the Rimutaka Range. Yesterday I visited the area with a group of Lower Hutt school children as part of their Year Seven geology camp.

Fully armed with the “Kiwi Fossils Hunter’s Guide” as well as another excellent book by Lloyd Homer and Phil Moore that describes the geological features of the Wairarapa Coast called “Reading the Rocks“, we visited several great geology hotspots along the coastline.

A striking feature that we noticed straight away was the flat topped escarpment that runs along much of the coast. This is a raised marine terrace that was at sea level about 80 000 years ago. It indicates that the whole area has been undergoing an enormous amount of uplift which continues to this day. 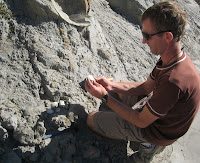 First stop was Hurupi Stream. (This is described in detail in the “Kiwi Fossils Hunter’s Guide“). The soft mudstones at the sides of the stream were deposited under the sea in the Miocene Epoch (sometime between 11 and 7 million years ago) , when the Aorangi Range just to the North was an island, separated from other parts of the North Island by a shallow sea. We found quite a few marine molluscs that are very well preserved and easily spotted. 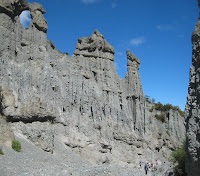 Not far along the coast road are the Putangirua Pinnacles. These spectacular features have been eroded out of a thick sequence of conglomerate. Hard layers or large individual boulders within the conglomerate form a protective cap at the tip of each pinnacle. The ground is strewn with loose rubble – testament to the fact that the erosion here is still very active. This might not be the best place to visit in a rainstorm! 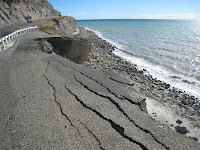 A few kilometers along the coast road, there is a dramatic example of coastal erosion where a whole section of the original road itself has disappeared! 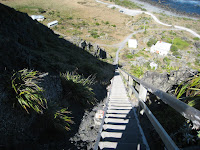 We followed the coast past the small settlement of Ngawi, and a huge tilted slab of fossiliferous sandsone called Kupe’s Sail, to the Cape Palliser lighthouse. This is built on a cliff of volcanic rock that was erupted under the sea as pillow lavas about 100 million years ago. The long staircase up to the lighthouse leads up to a great viewpoint. 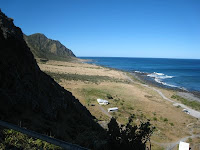 This is the Southeastern tip of the North Island of New Zealand, with nothing but ocean between here and Antarctica or South America. Just a few kilometres out to sea is the Hikurangi Trench, the collision boundary between the Pacific and Australian tectonic plates. The connection between uplifted terraces, fossils, erosion, earthquakes and volcanoes gave us all something to think about to round off our geological excursion.