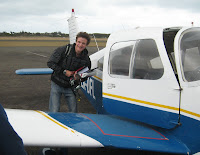 Yesterday I was offered a flight from Paraparaumu Airport to Kaikoura by Felix Morgenstern. His father Uwe is the water and ice dating specialist here at GNS Science. This was a great chance to admire some fantastic landforms created by the uplift of the leading edge of the Australian Tcctonic Plate right up close to the collision boundary, just east of the north end of the South Island.

We flew directly south across Cook Strait, away from Wellington’s cloudy skies to a clear day over the South Island. This picture shows the coast of the Wellington Peninsula fringed by marine terraces that have been uplifted and tilted by successive earthquakes. Cook Strait is in the foreground and the white wind generator towers are making use of windy Wellington’s prime natural resource!

On the other side of the Strait, the skies were clear. This is a view across the coastline to the south-east of Blenheim. The rocks that underly this landscape include several locations where the famous K-T boundary layer (Cretaceous – Tertiary or Cretaceous Paleocene boundary) is exposed. This thin dark layer of clay is found at different places worldwide. It marks the point in time when a massive asteroid impact in Mexico caused the extinction of the dinosaurs and many other life forms. One such place is the rocky hillside near to the true left of the river in the foreground. 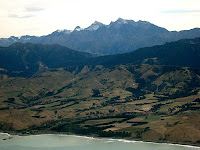 Soon we were passing alongside the inland Kaikoura Range, whose highest peak is Tapuae o Uenuku at 2,885 metres. It is made up of a complex of resistant igneous rocks, thought to be of Cretaceous age. Faults active for the last 20 million years are lined up along each side of the range, parallel to the plate boundary just off the coast. These are mainly strike slip (sideways moving) faults but there is also significant vertical movement pushing the mountains up by up to 10 mm a year.

I took this picture as we were approaching the Kaikoura Peninsula. Suspended sediment in the sea from river outwash has developed into a nice spiral shaped eddy. Beyond the narrow peninsula is the area where the Hikurangi Trough meets the coast of the South Island. The Kaikoura Canyon – a deep slice in the ocean floor just off the coast, has created a haven for wildlife there including whales and other marine mammals.

After landing for a short while at the Kaikoura airstrip we took a short detour out to sea. We didn’t see any whales but there was a crowd of dolphins surrounding a boat. A nice way to leave Kaikoura behind.