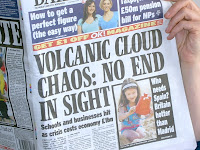 Having arrived at Heathrow a few hours before the shutdown of all flights over Britain due to the volcanic eruption in Iceland, it has been fascinating to watch the unfolding impact as the flight ban has been extended through the last few days. As with an earthquake or tsunami, a geological process is suddenly thrown into the public consciousness, even though it originates from far away. In this case the process is relatively prolonged and there is no-one who has any idea of how long the eruption might last or how the winds might be moving the ash cloud a week from now.

As well as having stressful consequences, there have also been benefits resulting from the ash cloud. I am staying in the south east of England, not far from Gatwick and Heathrow airports. For many people this is the first time ever that they are able to sit in their back yards and have a conversation without being drowned out by the roar of aircraft overhead. The weather has been sunny with clear skies, with no visible sign of the ash cloud that is causing so much disruption.

News bulletins are filled with the scientific background, economic predictions, traveler’s personal stories and political commentaries. I have been increasingly grateful for my good fortune in having got here just in time, whilst wondering if my return journey at the end of April will be equally unaffected. There are direct lessons to be learnt for NZ too as Gill Jolly and Graham Leonard, both volcanologists at GNS Science, describe in this media release