Julia Becker is one of the Social Scientists at GNS Science. Her role is to understand the human response to natural hazards, and she works with other scientists and organisations to help plan for future disasters. I asked her to write a diary of her experiences of working in Christchurch in the week following the Darfield ‘Quake: 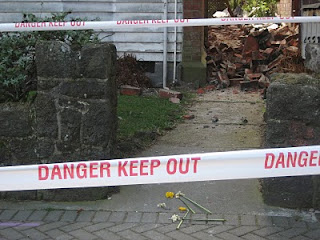 We arrive in Christchurch, two days after the earthquake. Driving into the city from the airport, much of the city looks quite normal. There are a few chimneys down and damaged brick fences. As we approach the city you start to see more damage, mostly to older brick buildings. Some are just a bit damaged with a few bricks fallen off while others’ facades have completely collapsed. There is quite a wide area around the city that is cordoned off and the cordons are blocked by police officers and military personnel. We have to take a big detour all the way around the city to reach our hotel. Many shops and supermarkets we pass seem to be operating. We drive past a clock tower and it has a big crack in it. At our hotel we drop our gear and then head to visit the city and regional emergency operation centres. They are very busy with many people coming and going, working away hard to respond to the earthquake. After having a few meetings with people to let them know we are here and providing offers of science and research support, we head back to our hotel for dinner and bed.

07/09/2010
Small aftershocks in the night occasionally wake me from sleep. I wake at about 6.00 am. While the water is working there is uncertainty over potential contamination so I have to remember to brush my teeth with boiled water. All drinking water needs to be boiled as well. In the morning we reconnect with the regional emergency operations centre and begin to set up an office there from which the scientific research response can be coordinated. I speak briefly to Red Cross volunteers at the regional emerg 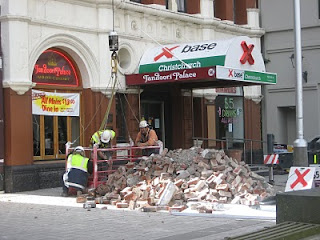 ency centre and they say the welfare centres are being well used, with more people turning up after the aftershocks in the night. A little later two of us from GNS obtain official passes to enter the cordoned-off city centre and inspect the buildings from the outside. Many new buildings look like they have stood up well to the earthquake. The Christchurch Cathedral seems pretty sturdy too. There are a number of buildings scattered throughout the centre that have red placards indicating that they cannot be entered due to structural damage. In the afternoon we head out to the suburbs and see the impacts of liquefaction. A few suburbs have experienced significant liquefaction, and sand volcanoes have popped up out of cracks in ground. Residents have already begun to clear away the sand by shovelling it up and placing on the grass verge in front of their houses, and the council is driving by and collecting it in trucks. Port-a-loo toilets have been set up for residents who don’t have working sewerage systems.
08/09/2010
Sleep is again disrupted by aftershocks throughout the night. This morning before breakfast we are also rattled by a large 5.1 aftershock (scary!), followed by several smaller ones. After breakfast we visit the town centre to observe more of the building damage. We see a whole row of shops made of bricks where the front of the building has simply fallen away on to the pavement in front. Luckily the earthquake happened at approximately 4.30 am so there were few people on the streets at that time and people were not hit by the falling masonry. A restaurant is housed in one of these buildings, and as you look through the gaping hole left by the fallen bricks you can still see the tables set up and ready for customers. 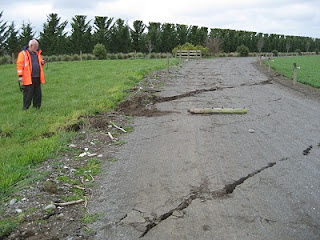 In the afternoon we visit the newly ruptured fault near Darfield. You can see where the fault has torn through several roads and fields. The rupture has offset the roads sideways and vertically. Initial repairs to the roads have been made to make them drivable again. You can also see where the fault has offset power pylons, trees and fences. At the very western end of the fault, an electricity substation is perched directly over the rupture and the surrounding fences and gates are twisted, but because the fault is quite distributed at this location the substation appears to still be intact and in working order. At the eastern end of the fault a house-owner is not quite so lucky, with the fault causing building damage to a resident’s home. 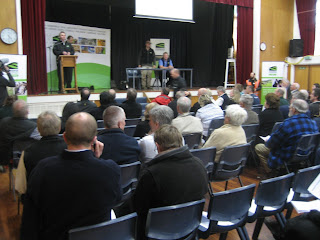 Today we visit a couple of land use planners in Christchurch and discuss issues related to recovery. We discuss having a strategic vision for Christchurch when going into the rebuilding and recovery phase. Following our meeting we take a drive out to Pegasus township, a new subdivision located approximately 30 minutes drive north of Christchurch. Previous studies have shown the site has liquefaction potential. There are a number of houses built there already, and also some empty lots. Pegasus seems to have survived remarkably well and our untrained eyes could not see any significant cracking or liquefaction. It

is suggested by the planners we speak to that geotechnical engineering works were undertaken when the subdivision was set up to try and avoid such problems. In the evening I attend a com

munity meeting in Darfield. The meeting was set up with the aim of to giving residents information about the earthquake, providing discussion on how they might feel after the earthquake, and providing advice on practical issues that might need addressing (e.g. water pumps, insurance, finance, government support). At the end of the meeting two guest speakers tell a couple of funny tales to provide some light humour to the meeting. The meeting is well attended with nearly 400 people coming along. On our way ho

me, driving down Riccarton Road we can see that the demolition of buildings has started, with several previously standing (but damaged) brick buildings now looking like piles of rubble.
10/09/2010
Attended several meetings related to recovery.
11/09/2010-12/09/2010
Back in Wellington.
13/09/2010 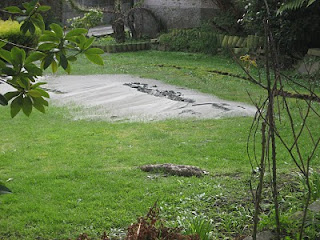 It has been 10 days since the earthquake and the clean-up of Christchurch City is well underway. Bricks have been moved from the pavements, and some buildings have already been demolished. Most of the city centre is now open to the public, with only a few areas still cordoned off. Most businesses that are able to access their premises are now operating. Out in the suburbs much of the liquefaction material has been swept up and carted away by the city council. However there are still many streets in the areas worst affected by liquefaction that are badly damaged, with large cracks in roads and properties, water issues and sewage issues. Signage placed by the Avon River reminds people not to enter the river due to potential contamination. A number of residents have moved out of their properties because of the damage they have incurred, or have gone to friends and family for reassurance. Some people are still residing in the welfare centres; however numbers have dropped since the earthquake occurred.