The different teams were working on or around the lake included: 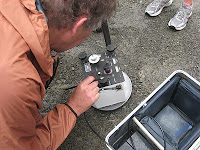 I was with the gravity survey yesterday. This involves taking a very precise gravity meter to different locations and making measurements through a small lens in the meter. The force of gravity varies very slightly over the surface of the Earth, depending on the density of rocks in the crust as well as the presence of mountains and valleys which cause a slight sideways pull. By measuring these variations and taking precise readings of the measurement locations using a GPS, a lot of information can be found out about the make up of the crust.

In the photo, Vaughan Stagpoole of GNS Science is taking a gravity reading. 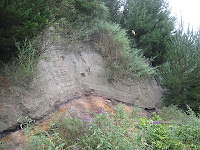 Although I spent most of today with the AUV team, I did get to see a fascinating cliff section that the rock samplers had had a look at. The pale grey upper section of the cliff is a sequence of fragments of pumice known as Rotomahana Mud, that was erupted on June 10th 1886. The black line in the photo is the soil horizon that was the ground surface on June 9th. The incredible power of the Tarawera eruption is captured in this single location – it shows how much the landscape was buried by the volcanic debris in the space of perhaps four or five hours.

The AUVs operated over the north eastern section of the lake, including over the area of the old Lake Rotomahana, and Pink and White Terraces. I went out with the boat to deploy and retrieve the AUVs as they were tested some more and launched on their missions. 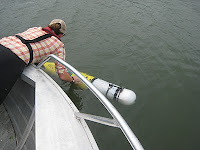 They are set to travel at a specific altitude above the lake floor – one at 10 metres, the other at 15, and so they rise and sink lower as they travel. However, at one point one of them collided with an underwater pinnacle which must have reared up vertically infront of it – allowing no warning to the sub. Although we had to check it over, the AUV was undamaged and was set back to work again.

In the photo, Amy is letting an AUV off on its next mission. 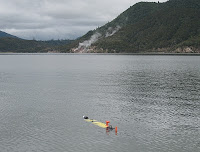 It is amazing to watch these robotic machines set off from the side of the boat, steer towards a prescribed direction and then suddenly vanish from the surface into the depths. They are then tracked on the land based computers which are informed of every aspect of progress, including position, speed, direction, depth, battery power etc. 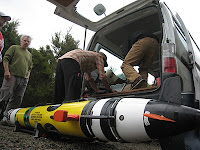 Once they are finished with a mission, or if there is a malfunction, they float to the surface and are easily located by GPS to be hauled onto the boat and back to the shore. They are then hooked up to the computer to download all the data, which can be immediately processed to produce 3D images, plots and maps. 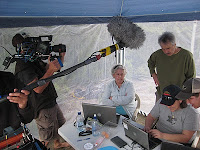 Of interest today was the discovery of numerous pock mark holes on the floor of the lake, with streams of gas bubbles above them. Down there also was even a terrace like formation, about 30 metres across – but don’t be too excited, it was well away from the location of the former Pink and White Terraces. It is not possible so soon to know exactly what this feature is, or if it is one of the many other features known around the lake before the 1886 eruption.