The submersibles, like two faithful and intelligent mechanised mammals, conitnued their diving and tracking progress today, closely monitored by their attentive minders. Seeking them at the end of a mission when they automatically float to the surface, is very reminiscent of looking for whales or dolphins, with only their ‘dorsal fins’ visible above water.

Most of today I spent with Vaughen Stagpoole and Fabio Caratori-Tontini from GNS Science, who were continuing their gravity and magnetic surveys. The instruments used allow extremely subtle variations of these forces to be measured. In contrast to the lake water and lake bed bathymetric measurements that are made by the AUVs, gravity and magnetism are influenced by the layout and distirbution of rocks deep in the crust. 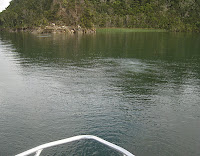 We were ferried to the different locations by Brad Scott, a volcanologist also from GNS Science, who is very knowledgable about New Zealand’s volcanoes. 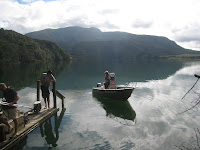 As we progressed along the shore, we passed some underwater hydrothermal vents where streams of bubbles welled up from below the water surface.Brad reminded us that recent measurments of the CO2 gas released from the bed of Rotomahana showed that the total flow is twice as great as that from Ruapehu Crater.

As we travelled around the edges of the lake, we climbed ashore at places that would be totally inaccessible other than by boat. 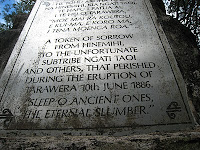 Because Rotomahana has restricted access, on a calm windless day like this it is a very peaceful place. As we moved in stages towards the looming presence of Tarawera the atmosphere of the place seemd very powerful. At one point we landed at a small jetty, from where a 2 km long track through the bush led us to Lake Tarawera.

On the way we passed a memorial to the victims of the 1886 eruption.