Yes – the unbelievable news is, that inspite of being located at the centre of New Zealand’s most violent eruption of historic times, shaken by volcanic earthquakes, covered by many metres of mud and ash and then flooded underneath a large lake, a large area of New Zealand’s iconic Pink Terraces of Rotomahana has been re-discovered!

﻿
﻿﻿﻿﻿
Scientists involved in the Rotomahana Project announced their findings last night at a special meeting in the marae at Whakarewarewa, 125 years after the Tarawera Eruption. Thanks to the underwater vehicle and imaging technology and skills developed by the Wood’s Hole Oceanographic Institution (WHOI), and the expertise of marine scientists from Lamont-Doherty Earth Observatory (LDEO) and NOAA-PMEL in the USA, this discovery has been made possible. A key component of the expedition’s field approach was the use of the Remus100 autonomous underwater vehicles (AUVs) developed at WHOI. 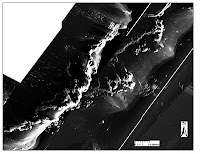 Dr. Vicki Ferrini of LDEO observed the terrace formations as she was processing images from the sidescan sonar on one of the AUVs on Saturday. After checking details like water depth, location, orientation, shape and size of the features, Cornel de Ronde and the rest of the science team reached the conclusion that these can only be a part of the original Pink Terraces last seen on June the 9th 1886.
The features show up as curved step like surfaces that are visible in the sonar images as bright reflectors due to their strong reflectivity, This means that they comprise a hard material, unlike the softer, therefore acoustically darker sediment that surrounds them. It is the steeply sloping or vertical sections that show up most brightly, probably because they are free from any overlying sediment. 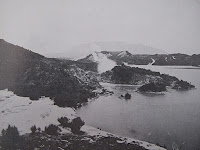 This early, pre-eruption photo of the lake shows the Pink Terraces on the left. In the middle distance you can see a hooked spit of land extending into the lake as a very distinct feature. This gives the lake shore a very identifiable contour just northeast of the Pink Terraces.

In the compiled bathymetric map produced by Vicki from the AUV survey data, the same hooked-shaped peninsular can be seen in the lake bed, now several tens of metres under water. This is in the northern section of Lake Rotomahana, in the area that has been indentified as the probable location of the Pink Terraces by previous researchers.

The close-up of the lake floor bathymetry shows this feature clearly (depths in the map at right are color coded- pink is deep and red is shallow). The main cascade of the Pink Terraces would fit in the green embayment in the top centre of the image, and the wide lower part of the terraces should extend down roughly in the centre along the green or pale blue band.When overlaid on top of the bathymetric map, Vicki’s step like rock features lie exactly on top of this location.
This means that the lower portion of the Pink Terraces still remain. It is possible that they were covered in debris by the eruption, and that subsequent water erosion has exposed their edges again. The question still remains as to whether the upper section of the terraces is still intact underneath a layer of sediment. The sonar sensors used in this survey are unable to reveal adequate subsurface detail to answer this. However, a future expedition could settle this question using seismic reflection techniques.

A further investigation was made by lowering an underwater camera, developed by Dr. Dan Fornari at WHOI, down to the bed of the lake to take a closer look. The following images are a selection from those taken. 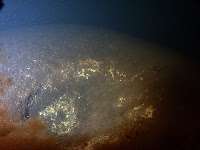 The first shows a small crater with a hazy cloud of bubbles and coming out of it. This depression is roughly a metre across. Because of disturbance caused by the high level of hydrothermal activity, the ranges of the camera images are only a few metres. * 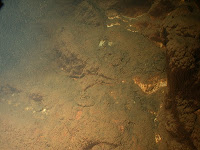 In the next photo you can see some vertical relief. On the right, the dark shadow is one of the terrace steps, whilst further to the left, across the sloping muddy lake floor there are some smaller exposed vertical sections of rock. These shapes are typical of hydrothermal silica deposits seen in other parts of the Rotorua geothermal area.* 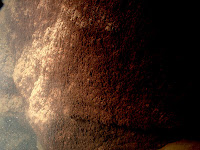 The last of the underwater photos, taken near the region identified by Vicki as being where the strong reflectors of the Pink Terraces are located, show the vertical edge of a terrace head on. The scaling is not exact but in the region of one or one and a half metres in height and could be an exposure of the lower part of the Pink Terraces. * 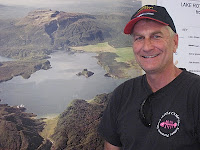 These initial findings leave many questions that can be followed up in the future. But for now, to know that at least a part of the Pink Terraces of Lake Rotomahana are still there, hidden in the depths of the water, is a fantastic outcome of the Lake Rotomahana Project. Quite apart from this discovery, the analysis of the overall expedition findings will give the scientists plenty to do towards the goal of understanding the whole hydrothermal system  of Rotomahana.  Dr. Cornel de Ronde, of GNS and leader of the expedition has something to smile about.