Sentry is the showpiece of our 2011 expedition to the Kermadec Arc Volcanoes. It is an autonomous underwater vehicle (AUV) that has been developed by the team at the Wood’s Hole Oceanographic Institution who are world leaders in submarine technology.

Unlike the other devices that are put over the side of the ship and lowered towards the seafloor, Sentry travels independently and therefore has the capacity to make long journeys over the volcanoes covering a wide area. 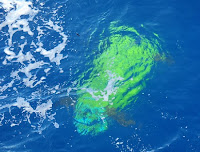 It has enough battery power to last for up to about 20 hours per mission.

All its missions are pre-programmed according to the bathymetry map that has been created from the ships multibeam sonar scanner. It moves at a constant height above the slopes of the volcanic cones, recording a range of measurements. Here you can see the track lines of a mission over Brothers Volcano yesterday, overlaid on the red contour lines.

For the duration of each Sentry mission, a couple of transponders are sunk down to the sea floor nearby to provide extremely precise location reference points that greatly increase the spatial accuracy of the resulting maps and records.  At the end of the mission, these float back up to the surface for collection.

Because it is able to travel so close to the sea floor and can move in any desired grid or spiral pattern, Sentry enables incredibly high resolution maps to be made with previously unachievable detail. With up to 10 different sensors including side scan sonar, temperature, pH and magnetics, Sentry is able to detect and measure widely distributed hydrothermal hot spots. 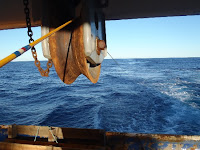 Whilst Sentry is operating far below, the ship can move away and perform its other operations such as magnetic surveys, CTDO (water chemistry and cloudiness), TOWCAM and sled sampling, which all help to add layers of useful information to the total picture of these volcanic seamounts.

The Sentry team monitor the progress of the AUV via short acoustic messages that are updated every few minutes. If necessary they can send commands back to it to redirect it or get it out of trouble. In this photo, Dana Yoerger, leader of the Sentry team, is at his workspace in the Sentry control centre.

At the end of its mission, Sentry floats up to the surface, and the ship pulls alongside so that it can be winched back on board. Because it has a broad flat profile, it catches the wind, and these deployment and retrievals with the winch can be exciting to watch!

During this voyage, the team were faced with some major technical challenges, requiring new parts to be sent from the US to New Zealand and then dispatched to the ship via helicopter and boat. Al Duester and Andy Billings spent many hours involved in complex problem solving to allow the show to go on.