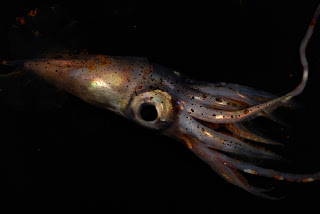 Our expedtion to explore the hydrothermal activity and mineralisation of the Kermadec arc volcanoes is now over. We arrived back in Auckland yesterday, after a successful three week research cruise.

Amongst the discoveries that were made were areas of present day and ancient hydrothermal activity, relatively fresh lava flows from previously uninvestigated volcanic craters, and possibly some new species of deep sea life, yet to be verified. Hundreds of geological and biological samples were collected, along with thousands of images of the sea floor, and innumerable sonar, magnetic and gravity measurements.


Rob Stewart of NIWA took the image of a squid that was pulled up by one of the sled tows. It is only a few centimetres long.

These videos will give you some idea of the methods used and the findings of our Kermadec Expedition 2011:

As a final image, here is a photo of our last sunset of the voyage as we steamed towards Auckland. It had many of us captivated as we stood on the deck admiring the changing colours: 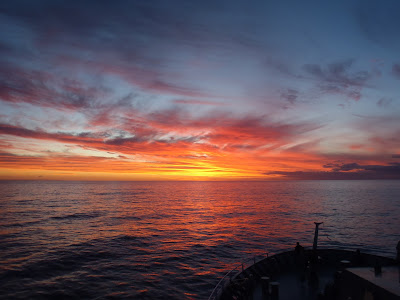