TOWCAM is an underwater camera that is lowered down to the sea floor and pulled along just above the bottom on a long winch line. It has an altimeter on it that allows the scientists to pull it up or lower it to keep it just above the bed as the ship drags it along sideways.

Here you can see TOWCAM being lowered into the water and down into the deep blue depths to over 1100 metres depth. 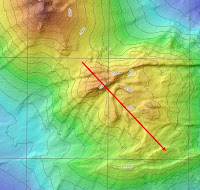 Every ten seconds it takes a photo timed with a strobe flash to give a stream of images along the designated path.  The red line on the map shows yesterdays mission across the summit of the southern cone of Clark Volcano, where hydrothermal activity was expected to be occurring. The total length of the path shown is about 3 kilometres. Up on the ship’s bridge, the TOWCAM team from Woods Hole Oceanographic Institution in the US, manually adjusts the winch to keep the camera as close as possible to 4 metres above the sea bed. I watched Marshall Swartz as he continuously monitored the computer screen and adjusted the winch up and down in response to TOWCAMs signals of changing water depth.

When TOWCAM has completed its mission after several hours, it is pulled up to the surface again. 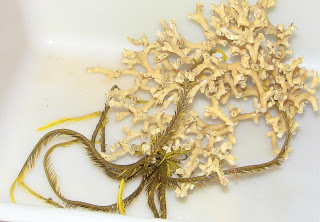 Tim Shank, the biologist in the WHOI team, was delighted to find that by chance TOWCAM had hauled up some specimens off the sea floor including a beautiful coral, some brittle stars, and a crinoid. 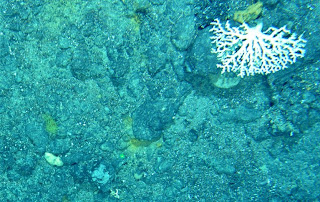 Here are three of the three thousand photos that were taken on TOWCAMs first mission on Clark. They were downloaded after the camera had resurfaced, and Tim checked each one of them for signs of hydrothermal activity, variations in the geology, and evidence of interesting biological species. The first of the undersea pictures shown here includes a hard coral and some sea anemones living on hard volcanic basalt that was erupted from Clark Volcano. 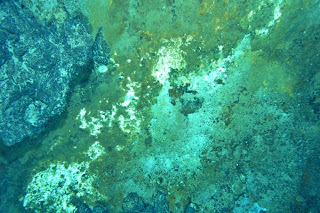 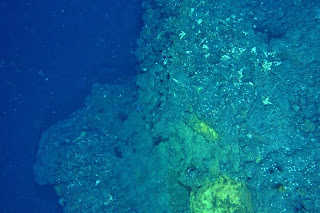 In the next photo, you can see the yellowish colour of softer sediments that have been altered by hydrothermal activity.

Lastly here is an image of a steep face of volcanic lava that has also been stained by ongoing hydrothermal activity.