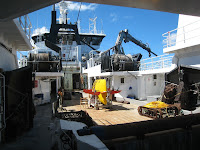 We have now been traversing above Clark Volcano for several days, and a variety of surveys have been operating, including dredging for mineral and biological specimens, photography of the sea floor, magnetic surveys and water chemistry sampling.

The technological centrepiece of our expedition to the Kermadec Arc is a strange object known as ‘Sentry’. 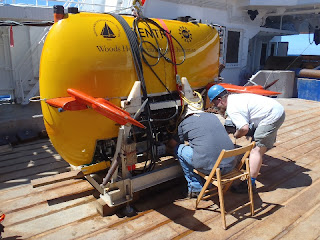 Sentry is a bright yellow un-manned submarine that can be programmed to dive to the sea floor on journeys of up to 19 hours long, manoeuvre up and down over obstacles, and take a whole variety of close up readings with its many sensors.

On Sentry’s initial dive a few days ago, its multibeam scanner stopped working. This feature is a very important part of the Sentry’s armoury of equipment. It is used to make very high resolution maps of the sea floor, which are extremely detailed because Sentry is travelling so close by.

So while the other scientists have been very active with their own projects, the Sentry team have been working on solving this key problem, finally organising to get a replacement scanner. This was flown to New Zealand from the US, cleared through customs, and immediately flown to us yesterday by helicopter out of Auckland. 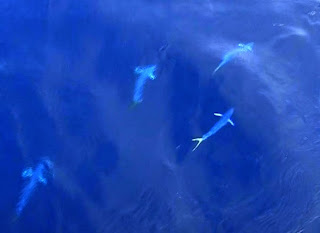 The delivery was lowered down from the helicopter in a large container, whilst a crowd of us enjoyed the spectacle from the front of the ship.

Shortly afterwards, these beautiful fish called mahimahi, each about one and a half to two metres long, paid us a visit from below. Gently cruising around the ship for about half an hour, their offering to us was just the simple appreciation of their presence. And as from last night, Sentry is on duty, now deep below us.