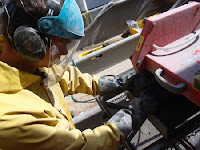 Along with biological specimens, the sled brings a lot of rock off the sea floor. Christian Timm sorts through all the samples, cuts some of them up with a rock saw, and packs and labels them to be studied in detail back at GNS Science. 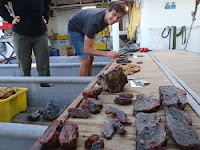 The different minerals present in the samples will be analysed to give detailed information about the processes occurring deep down in the collision zone where the Pacific and Australian plates meet, as well as about the hydrothermal alteration of the rocks at the sea floor.

Here is a selection of examples from off the cone of Rumble 2 West volcano that we have been checking out for the last few days: First up is a piece of volcanic rock (basalt) that comes from the cone of Rumble 2 West. It would have cooled rapidly as it encountered the sea water, which has preserved the flow structure running through the centre of the specimen.

Hydrothermal fluid contains a lot of iron that it has dissolved from the basalt it has passed through down in the crust. As it reaches the sea floor and cools, it precipitates out the iron as an oxide called haematite, which has a deep red colour.

Silicon is the most common element in the earth’s crust, along with oxygen with which it combines as silica (quartz). There are many other siliceous minerals too, some of which are precipitated around hydrothermal vents in association with microbes.

These yellow and orange pieces contain several types of silica with different quantities of trace elements that give a wide colour range. 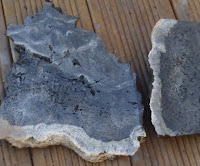 The whitish stripes in this piece of basalt are from small crystals of barium sulphate or barite. As sea water flows down into a seamount and heats up, it loses a lot of calcium sulphate which precipitates out. The hot, sulphate poor fluid then dissolves barium from the surrounding rocks, bringing it back up to the sea floor. The barium then combines with the sulphate in the fresh sea water to give rise to these barite crystals. They tell us that hydrothermal fluids have been cycled through the crust in this area, and can even be dated to give a timescale for the process. 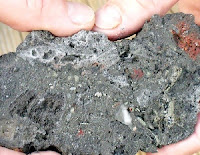 This small piece is a jam packed mixture of rock fragments and minerals. It It is part of the debris from an old broken up black smoker chimney. It is loaded with valuable metal rich compounds that have crystallised as the hot hydrothermal fluid gushed out into the surrounding sea water. 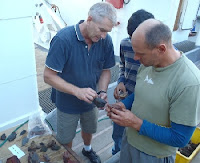 Cornel de Ronde is checking out the finds and explaining some of their features to crew member Peter Morrison.

0 thoughts on “Rock in the Boat”