Fabio Caratori Tontini is interested in measuring the magnetic properties of the rocks on the sea floor. Because most of them are volcanic lavas that contain a lot of iron, they have become magnetised as they cooled and solidified in the presence of the Earth’s magnetic field. 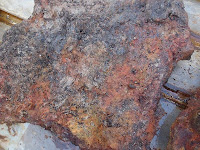 When the hot geothermal liquids pass through them, the rocks  become progressively demagnetised because the hot fluid dissolves and carries away the metal (iron) ions. This is of course why the hydrothermal fluids become enriched in these ions, and bring them up to be precipitated when they contact cold sea water. In the second photo you can see that there is a lot of red iron in this rock. 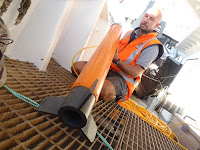 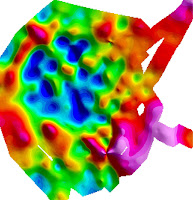 Fabio uses a magnetometer that is towed behind the ship in a grid pattern above the volcanoes. This measures the variations in magnetism which are then plotted on a map. His results can be compared to maps of present day hydrothermal activity, to tell us something about how the activity has changed over time.

There is also a magnetometer on board our yellow submarine SENTRY that is run much closer to the sea floor, and picks up a lot more close-up detail. Here is a high resolution image of the magnetic anomalies on Clark volcano that were recorded by SENTRY a few days ago, and shown graphically by Fabio.

The blue lowly magnetised areas are the ‘ burn holes’ that will generally be centres of rich hydrothermal mineralization because the minerals that have been leached from the deeper rocks are now spread out in deposits at or near the surface. The orange and red areas retain their more of their original magnetism and will not have been strongly altered by hydrothermal fluids.

In the second graphic, Fabio has added to the picture by overlaying the magnetic data onto a 3D image of the cone of Clark Volcano. 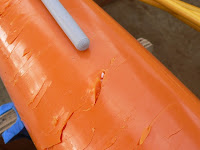 On a previous expedition, Fabio got some strange readings on his magnetometer, and noticed that there was extra tension on the cable. After pulling the device back on board, he found that it had been severely mauled by a shark, with nasty bite marks on two sides. In the photo you can see that there is even a small piece of white shark’s tooth left behind in one of the gashes. I guess that the magnetometer now has a lower level of attraction for the shark who will think twice before attacking a large fast moving goldfish again…

0 thoughts on “The Magnetic Charms of the Sea Floor”