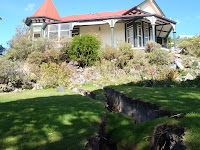 This week I have been with Garth Archibald, surveying areas in Christchurch that have been affected by rockfalls and slips. These surveys provide data which is used to calculate the stability of cliffs and slopes, and this provides useful information to planners and geotechnical engineers. 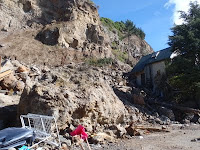 At Redcliffs, Garth set up his laser scanner to make a 3D scan of the rock face. Houses in this area suffered catastrophic damage from rockfall during the February 22nd quake.

Click here to listen to Radio NZ’s Morning Report interview with Garth at work at Redcliffs. 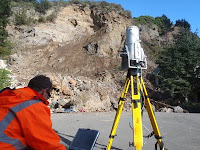 The laser scanner sends out about 11000 laser pulses per second. The time it takes for the light to be reflected back to the scanner, gives a very precise measurement of the distance to each point, allowing Garth to make high resolution scan images. He will compare the results with those of a previous survey to see if any areas of the cliff are bulging or tipping over, if cracks are opening up, or if there have been any further rock falls. 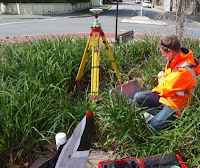 Another area we worked in was part of Hillsborough where a large area of hillside slipped during the earthquake. This time we used a GPS (Global Positioning System) unit to precisely locate several points. These are being re-surveyed regularly to better understand the nature of the slip. In this photo Garth is setting up the GPS base station at a survey point well clear of the slipped area.

In the final photo, Garth is taking a GPS reading at the lower end of the slip. Here the ground has been compressed, and you can see how it has ridged up along the driveway. The fence has also buckled by the compression.

0 thoughts on “Rockfalls and slips in Christchurch”