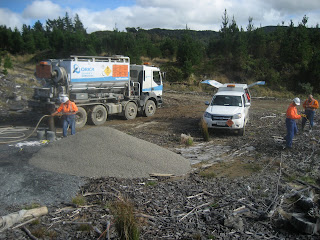 About a dozen field teams have been out over the weekend  deploying geophones along the 90 kilometre transect of the SAHKE seismic survey.

The first photo shows some of the Orica contractors  loading and priming one of the transect shot holes. 500 kilogrammes of explosive emulsion is being pumped down a 50m bore hole. The pile of gravel in the foreground is used to back fill the hole on top of the explosives. The idea is that the shock wave is directed downwards into the earth rather than up into the air.  (Photo by Stuart Henrys) 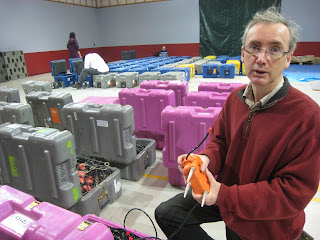 It is very important that every geophone is in perfect working order and set up in exactly the right way, as  there will be no possibility of repeating the survey if anything goes wrong.

The second photo shows Stuart Henrys, project co-ordinator, with some of the equipment being prepared at GNS Science, Lower Hutt. Getting all the equipment set up and deployed is a huge organisational feat. Stuart is holding one of the many hundreds of geophones that will be embedded in the ground along the survey line. 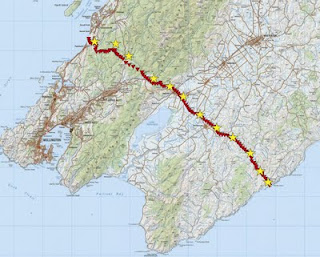 Apart from the New Zealand participants (Victoia University and GNS Science), a large amount of equipment and expertise is being contributed by the Earthquake Research Institute at Tokyo University, Japan, and the University of Southern California

The map shows the actual location of the seismic survey line, with the positions of the shot holes indicated as stars. Depending on the time required for putting all the geophones in place, the detonations will be set off overnight during this week. The explosions are detontated at night to avoid too much interference from vibrations caused by traffic on the roads. 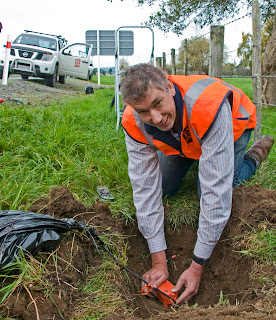 When the geophones are deployed they have to be pushed into the ground so that they are well embedded. This ensures a solid contact. In this photo by Margaret Low (Photo Librarian at GNS Science) Vaughan Stagpoole is burying one of the 900 geophones alongside a road in the Wairarapapa.

Check out our time-lapse of the busy science teams preparing the equipment for the SAHKE survey. Two days compressed into just over a minute to the music of Lykke Li!