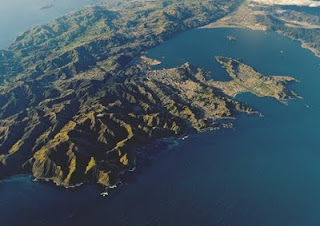 Ever since 1855, when New Zealand’s largest ever recorded earthquake (magnitude 8.1) shook the Wellington Region, a lot of effort has gone into understanding the earthquake risk in and around New Zealand’s capital city. There are several large fault lines in the area, including the Wellington Fault. This is the most active fault of the system, and stands out clearly, passing along the Hutt Valley and right through Wellington City itself. For more background information check here or watch this video.

However, the largest fault of all, the interface between the Pacific and Australian Plates, underlies the whole region. 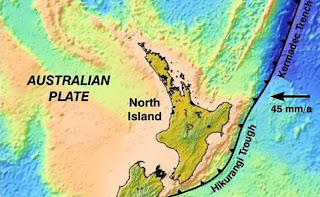 The two dimensional map shows  the line of the boundary between the plates east of the North Island. In three dimensions, it is a sloping boundary (known as a subduction zone), with the Pacific Plate dipping under the Australian Plate. Plate collision is occurring at an oblique angle rather than head on, which is why there is such a large component of strike slip (sideways) motion in the North Island Fault System. 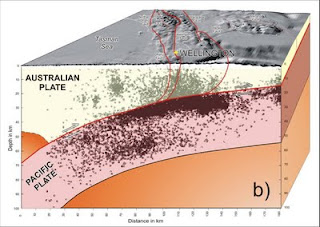 The hidden, subsurface plate boundary has been mapped over the years using evidence from thousands of small or medium sized earthquakes generated on or nearby to  it. Seismometers are used to locate these earthquakes, and the seismic waves give information about the geological structures and rock types that make up the two interacting plates. Under Wellington the boundary dips gently down to the North-West at an angle of about 9 degrees, and is about 25 kilometers deep under the city. 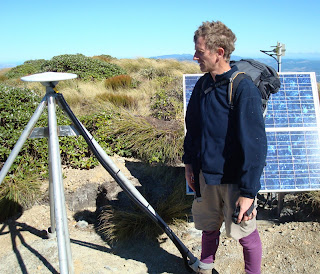 Over New Zealand there is a widespread array of GPS stations continually monitoring their location with great precision. This station is set up in the Tararuas, not far north of Wellington and the Hutt Valley.

Scientists also carry out GPS campaigns to make repeated measurements at a large number of locations when they want more detailed coverage. 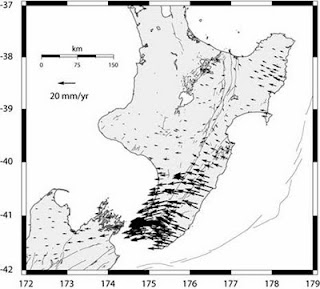 Over time these recordings show that the surface of the landscape is being deformed by tectonic movements. These measurements indicate that a large segment of the crust of the Australian Plate in the Lower North Island is stuck to the underlying slab of Pacific Plate, and is being dragged along to the west faster than the Hawkes Bay or East Cape areas. There have been different reasons for this proposed by scientists, but it is believed to be caused mainly by friction on the interface between the two plates.

It is very important for us to develop our understanding of the nature of this plate interface and the earthquakes that it produces, as subduction zone ruptures potentially create the most destructive earthquakes and tsunamis worldwide. The recent earthquake in Japan is one such example. 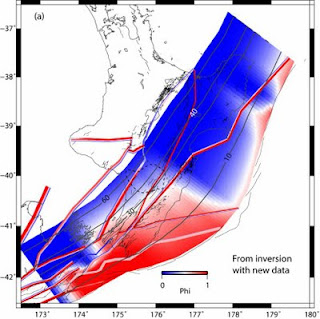 In this coloured image, the red colour indicates a high “slip rate deficit” or high degree of coupling between the subducting and overriding plates in the Lower North Island. This segment of stuck plate boundary is about 70 km wide and 140 km long.

If it ruptured it would produce an earthquake of magnitude 8 or above. It is even possible for larger sections (eg the length of the North Island) to rupture occasionally in a single massive earthquake. For more information about the locked plates under the North Island, check out our website here.

In order to improve our knowledge of the plate boundary, a major GNS Science co-ordinated project is being carried out next week. This involves a 90 km seismic survey crossing the lower North Island from one side to the other. Instead of listening out for natural earthquakes, the survey will use explosives, detonated down boreholes, to produce the seismic waves. Hundreds of geophones, spaced 100 metres apart, will pick up reflected sound waves to map the plate interface, faults and other features in the crust. Scientists from GNS Science, Victoria University, Tokyo and California are collaborating in this project.

For some more background to this project, have a look at our media release, or listen to Tim Stern of Victoria University in this radio interview.