Three years ago I visited Mangahouanga Stream in Hawkes Bay  along with a group of GNS Scientists. This is the area where Joan Wiffen, New Zealand’s famous “Dragon Lady” found the only known bones of dinosaurs from New Zealand, as well as various marine reptiles, prior to her retirement from fieldwork about ten years ago. I described this visit in my blog at the time.

What I didn’t mention in my blog was the existence of a remote valley that we believe might have only been visited once by a geologist prior to 2009.  The valley is a tributary of the Mangahouanga Stream.

As well as being protected behind a large privately owned forestry block, this hidden valley is made particularly inaccessible by a high waterfall and densely forested ridge. Along with the forest manager Pete Shaw, I had managed to enter the valley via very steep and rugged bush in 2009. We spent several unforgettable hours travelling down the un-named stream (now called Wiffen Stream), finding several Cretaceous reptile bones in large concretions.

The photo shows Pete in 2009 with the prize find of the day moments after he pulled it out of the stream. It is a cluster of several reptile vertebrae, subsequently identified as belonging to an elasmosaur. Although heavy, Pete managed to carry it out, whereas most of the fossils we found that day had to be left in place. 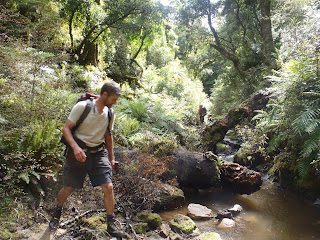 Last week I returned to the area with a team of GNS palaeontologists along with Victoria University student Ben Hines. One of our aims was to explore the hidden Wiffen Valley to  have a closer look at its geology and fossils, 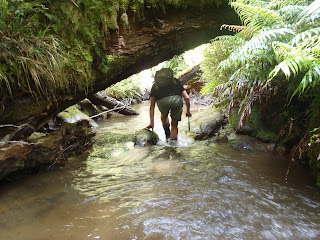 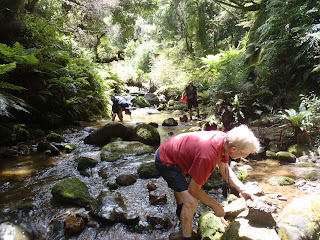 There were log jams, tree trunks and waterfalls to negotiate as we travelled down the stream.

We took our time to throughly check out the boulders for fossils as we moved slowly along. 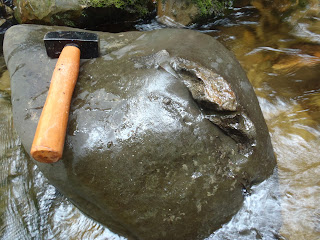 The reptile bones are typically found in very hard concretions like this one. We were unable to identify this particular bone, or remove it from the concretion, so it was left in situ along with several others that we saw. 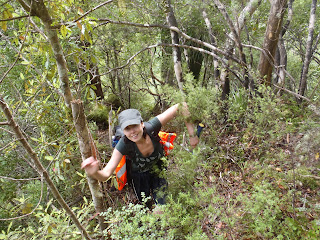 In this photo  Marianna Terezow of GNS Science can be seen tackling the dense bush that must be traversed to access and return from the hidden valley.