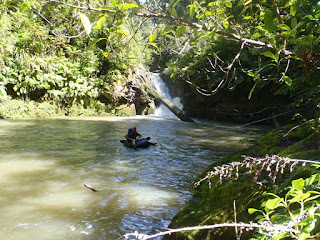 On our second day in the Maungataniwha Forest, some of us explored the lower Mangahouanga Stream using the well established kiwi river transport method of tyre tubes. This allowed us to visit parts of the river that would otherwise be very difficult to reach. Initial access to the river was via bush bashing through pine and then native forest, and down a steep climb to the water’s edge. 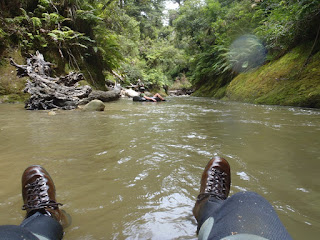 In the second photo I am following Ben towards our next fossil hunting stop off. 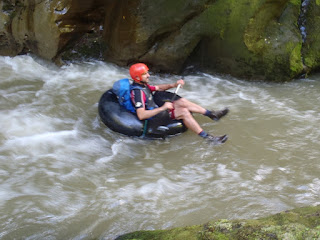 James Crampton gets speedy on one of the faster sections of the stream. 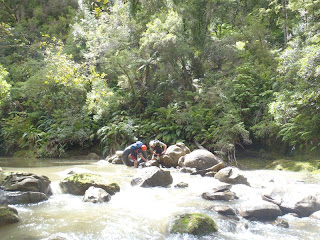 Where possible we stopped to closely inspect each boulder for the tell tale signs of fossil bones, wood or shells. 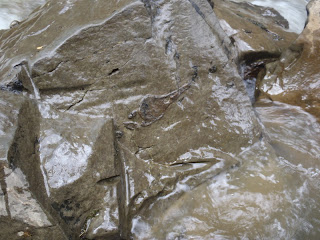 Here is an example of fossil reptile bone (centre of photo). Because of the hard surrounding rock, these bones are not removable except using painstaking laboratory methods over many months. Although we found several interesting fossils, we were surprised that they did not seem to be as abundant as they were in 2009. This will have been due to the higher river levels, and the random redistribution of boulders during occasional flood events. 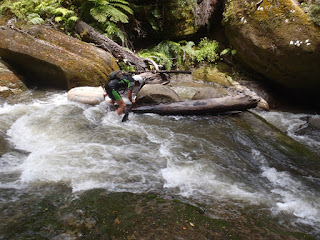 Pete Shaw, forestry conservation manager, about to launch down some rapids. 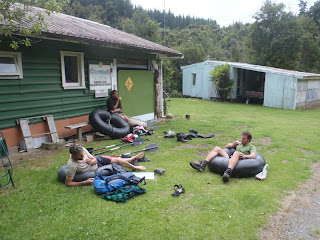 Finally we arrived at the Rockhounds Huts, – built by Joan Wiffen and her team in the seventies as a base for their summer explorations of the Mangahouanga Stream.