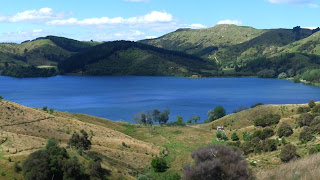 Lake Tutira is a scenic spot on the route between Napier and Wairoa in northern Hawkes Bay. It is in a very rural setting, surrounded by steep hillsides and farmland.

The landscape around the lake contains several powerful geological stories. 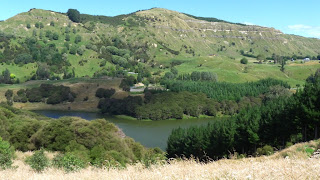 The first is that the hills themselves, made up of rocks that are about 1.8 million years old, reach a height of up to 800 metres above sea level. Before being uplifted and exposed by erosion, the rocks may have been buried to depths of 500 to 1000 metres. This means that they have been rising at an average rate of about a metre every 1000 years. 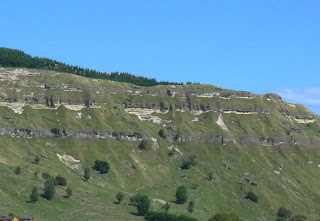 When you look at this steep hillside, you can see lines of cliffs running almost horizontally across the slopes. These bluffs are made of relatively hard limestone, with softer muds and sandstones hidden beneath the grassy slopes separating the cliffs.The top limestone band that you can see correlates with the one on the top of Waipatiki Beach that I showed in a recent post.

These cliff lines therefore represent the cycles of global change that repeated every 40000 years. The hard limestones were deposited as sea levels were slowly rising, while ice caps melted at the end of each glacial period, as shown also in my previous posts from Waipatiki and Darkeys Spur. 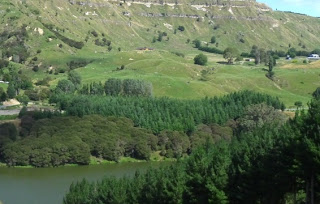 The next landscape feature of interest is this area of grassy hummocks just beyond the pine plantation. These are the debris pile from a massive landslide that slid down from the nearby hills about 7200 years ago. It blocked the stream that flowed down the valley, thus forming the present day Lake Tutira.  Similar huge rock slides occurred in other parts of the region at the same time. Scientists believe that they may have all been triggered by a single massive earthquake. 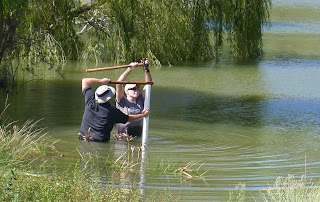 One of our activities on the recent ‘Dinosaurs and Disasters Geocamp” with Hawkes Bay schools was to drill a sediment core from Lake Tutira. Kyle and Richard used a PVC drainpipe which they pushed into a shallow part of the lake bed. 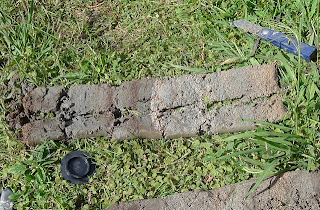 Although only about half a metre in length of core was extracted, you can clearly see a number of layers. The top of the core is to the left of the photo, with several organic rich layers visible. The lower half consists of varying amounts of pumice that will have been washed into the lake from where they accumulated after the Taupo eruption 1800 years ago.

The lakefloor sediment has in fact been studied in detail by researchers from GNS Science and other institutions . In 2003 a drill rig was set up that retrieved a 27 metre core right through to the base of the sediments. It revealed a detailed history of the environment around Lake Tutira over the last 7200 years: 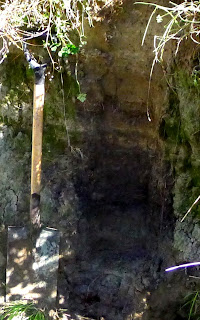 During Cyclone Bola which passed over Hawkes Bay in 1988, over 750 mm of rain fell over four days.  A huge number of mudslides came off the hillsides over the whole region.

In this photo, Richard Levy and I have exposed a buried soil layer next to Lake Tutira. It is beneath about metre of pale brown ‘Cyclone Bola Mud’  (top half of image). The dark soil layer below contained branches of wood. Further down there was another pale coloured mud layer from an earlier rainstorm.