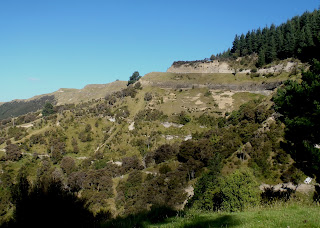 Along with Waipatiki, another excellent Hawkes Bay locality for looking at rocks laid down over a cycle of sea level change is Darkeys Spur, about twenty minutes by car west of Lake Tutira. The road is very narrow and care should be exercised to park safely and watch out for vehicles. Fortunately the road is not a busy one. The road winds up a hill and the rocks are well exposed in the cutting on the uphill side. 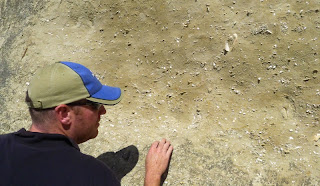 Kyle Bland of GNS Science has mapped the geology of Hawkes Bay in detail. He showed me what there is to see at Darkeys Spur, and also led our recent Geocamp visit there. 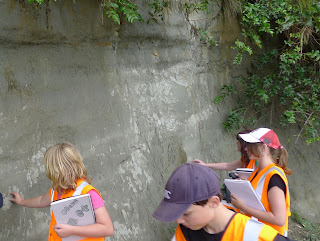 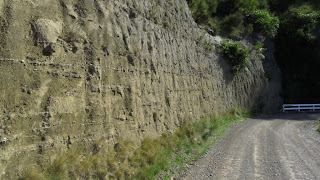 Not far up the sequence, the colour changes, the particle size increases and a wide variety of fossils starts to appear in rocks which now indicate decreasing water depth. 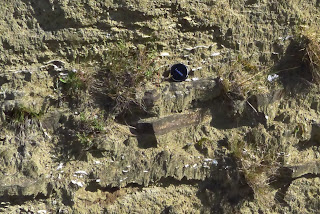 In this close up image, you can also see that the shallower water sediments are cross bedded, indicating strong water currents. The bivalve shells are also facing concave side down which is what happens to them when washed along by moving water. This indicates very shallow water just below or within wave depth. 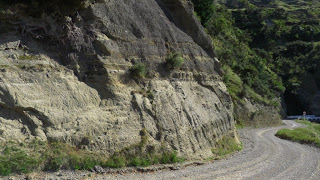 A little further up the road, the rock type (lithology) changes to gravels, indicating a beach environment as sea levels decreased further. In this image you can see the marked transition between the nearshore sediments and these gravels. 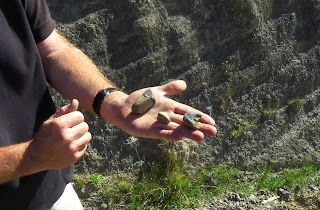 Finally, river gravels can be found mixed in with the beach gravels. They can be distinguished because the stones on a pebble beach tend to be flat whereas in a river bed they are more rounded or blocky shaped, such as the ones that Kyle is showing here.. 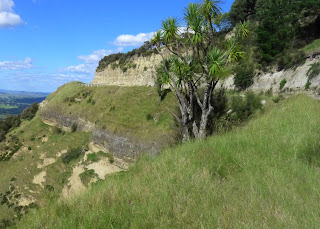 Above the gravel deposits (seen in the lower cliff in the centre left of this photo),  there are lime rich sands (upper cliff), indicating that sea levels were  rising again. At the time when these deposits were laid down, these sea level cycles were about 40000 years long, related to the variation in the tilt of the earth’s rotational axis.

Rock records that show cycles of sea level change are also found along the Wanganui coast for example at Ototoka Beach. They offer a globally significant geological insight into the way polar ice sheets have expanded and retreated during repeated ice ages.