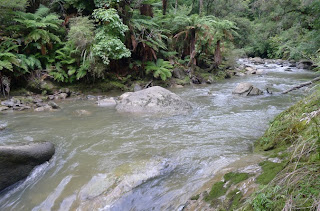 In 1958, Petroleum Geologist Don Haw was mapping the rocks in the Mohaka river catchment of Western Hawkes Bay. The project was part of a wide ranging exercise to evaluate the hydrocarbon potential of the East Coast basin at that time for BP, Shell and Todd.  His discovery of reptile bones in the Cretaceous sediments was recorded on Company maps which subsequently caught the eye of Joan Wiffen in the early seventies. She ventured into the region to take a closer look. Remarkably this led to her eventual unearthing of New Zealand’s first dinosaur fossils, as well as many other new species of exciting Cretaceous reptiles. For her significant effort Joan became known as the “Dinosaur Lady”.  For his essential initial work, Don was awarded the Wellman Prize in 2001. 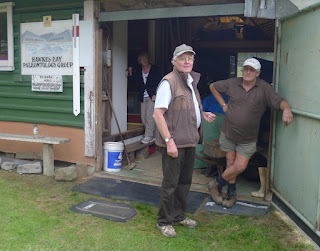 On March 24th 2012, 54 years after his initial explorations,  Don returned to Mangahouanga along with the teachers and school children who were participants of our GNS Science “Dinosaurs and Disasters Geocamp“. This was a historic day as it was his first return to the valley in all that time. In the photo, Don (centre) is with Robyn Adams, one of Joan Wiffen’s long term fossil hunting assistants who still leads trips into the valley.
In the following transcript, Don describes his experiences from all that time ago: 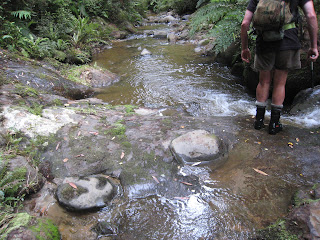 “We were mapping outcropping sediments in the Upper Mohaka river tributaries, observing for the first time, what might be there. Nobody had really mapped that steep isolated terrain before. We were keen to find what was present between the greywacke basement rocks and the overlapping Upper Tertiary sandstone section. Perhaps nothing – we just didn’t know – maybe the Upper Tertiary rested directly on basement.   Was there any Cretaceous section exposed?  This was so important to the assessment of the hydrocarbon prospectivity of the region.” 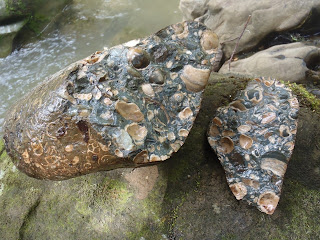 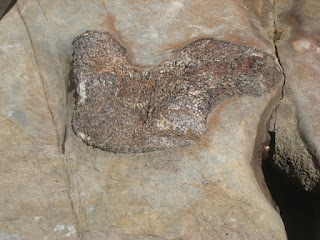 “It was high summer, February 1958 I think, and we were scrambling up this really difficult stream bed, huge boulders, and totally bush covered. We recognised we were stepping on boulders and outcrops of massive concretionary sandstones which we had not seen before. These appeared to be of marine origin, and had fine shell debris in them which was triggering off alert signals to me – There might be other important fossils here!  We should look carefully! I was with field assistant Ken Fink Jensen to whom I owe much for his support and encouragement in those days, Together we began to examine some odd protuberances on the surface of certain boulders, which I quickly recognised, because of their shape and texture, had to be organic and which were almost certainly bone remains from some marine creature.  I think my initial reaction was that they were fish remains. The rock was hard, very hard, and we extracted several and brought them back to Gisborne.“

“They were sent off to Jack Marwick, a retired NZGS chief palaeotologist,  who identified them as reptilean bones. Eventually they were recognised to be Mosasaur fossils, a type of  marine Plesiosaur.  It was a first for New Zealand.” 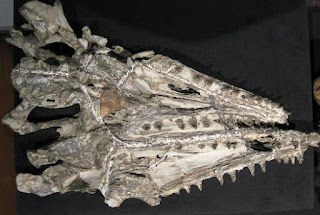 “This region became the hunting ground of Mrs Joan Wiffen who followed up our fossil discovery, with many years of hard work there, excavating numerous other finds from the same stream bed.  She, with her husband and family team, found many new fossils, some really exciting, including some terrestrial dinosaur remains which must have been washed into those early primeval seas. It has now become one of the most prolific fossil sites in New Zealand.”


The final image shows a mosasaur skull that was found by Joan and her team and is now kept at GNS Science in Lower Hutt.