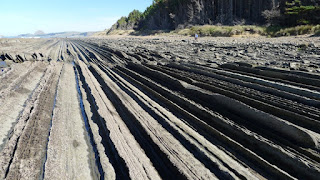 Whakataki is a spectacular spot on the Wairarapa coast just north of Castlepoint. It features as one of the localities on our GeoTrips websiteThe shoreline is a large area of tilted rock strata that have been eroded into a broad, flat platform extending for hundreds of metres along the coast.

The rock layers are alternating sandstone and mudstone layers that stand out as distinct lines. 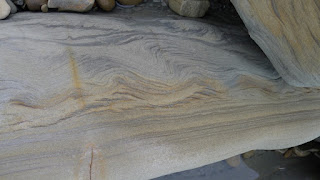 It is believed that they formed as cyclically repeated turbulent flows of sand and mud that avalanched down and over the sides of an underwater channel about 500 to 1000 metres below the ocean surface. These sorts of deposits are know as turbidites. Here they are of early Miocene age (roughly 20 million years old) 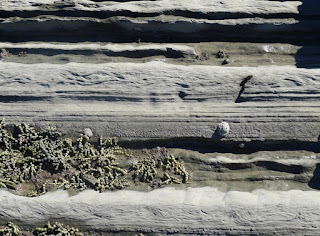 As the sediment laden water surged across the sea floor it laid down a deposit of sand and mud with several distinct layers. The base layer typically has very flat laminations, followed by a more convoluted and rippled layer above it. Above that the particles get finer as the remaining cloud of mud slowly settled on top of the coarser sandy layers below. 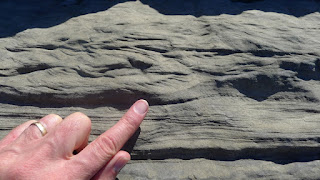 It is interesting to look at the different structures and imagine how they formed in the dark depths of the sea so long ago. Here I am pointing at some climbing ripples in the upper sandstone layer, above a more regularly laminated base layer of the flow. They show that the current was moving from the left (south). 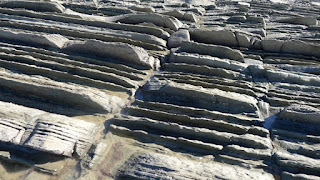 Exploring the area shows up many interesting geological features.
Here you can see that the beds are not only tilted up, but they have been dislocated by faults. 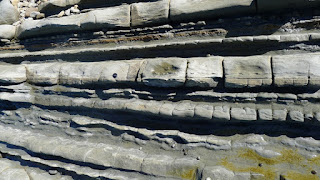 In this image you can see joints cutting across the beds at a right angle. They develop as the pressure on the sequence decreases due to erosion of overlying material. You can see how the spacing between the joints is wider for the thicker beds, and closer together on the thinner ones. 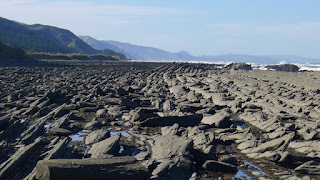 The rock layers are of interest to geologists because similar thin bedded fine grained deep sea sediments are often found to be important reservoirs for hydrocarbons which penetrate into the tiny pore spaces between the individual grains of sand.

By studying these beds where they are exposed at ground level, we can gain important information about similar but more inaccessible  sequences deep below the surface that may actually contain trapped oil or gas. 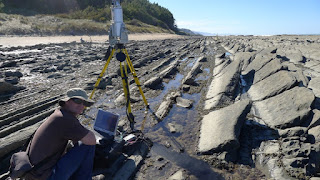 During our visit, Garth Archibald was making a laser scan of the surface of the shore platform. This will be translated into a 3 dimensional computer image of the platform which can then be used for detailed analysis of the different layers in the sequence. 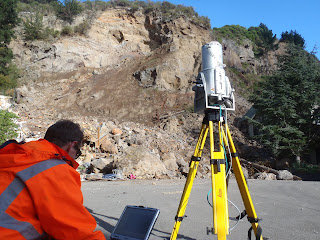 Garth has used his laser scanner in a wide variety of settings, including a number of Christchurch cliffs that were seriously shattered by recent earthquakes, as you can see in this video.