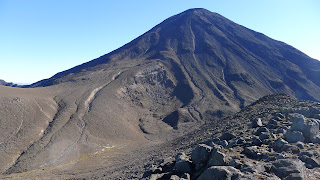 Climbing Ngauruhoe from the South is well off the tourist route, and involves scrambling up unstable blocks of lava for about 700 vertical metres up the face of the cone.

I chose to go up more or less up the centre of the view you can see here, and it took me about an hour and a half of steady plodding to the top. 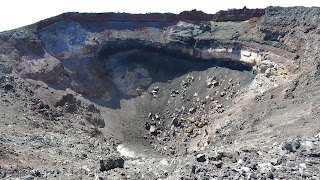 The crater of Ngauruhoe was last erupting from 1973 to 1975, during which time it occasionally threw out blocks of lava to a distance of about 3 kilometres. If you click on the image to enlarge it you will see people on the crater rim that give an idea of the scale of the image. 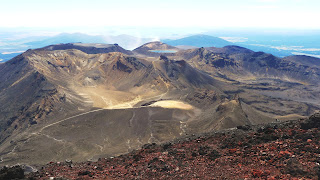 Ngauruhoe’s crater rim provides what to me is one of New Zealand’s finest landscape views. On the far left is Tongariro peak, then the flat top of North Crater and the Blue Lake (with steam from Te Maari just behind it). Just below the Blue Lake is the top of Red Crater and on the right side are old lava flows in the Oturere Valley. The Tongariro crossing track passes through South Crater as a white line in the centre of the photo. 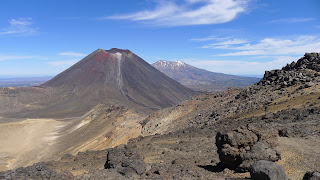 Descending the northern slope of Ngauruhoe, I then climbed a rocky ridge up to Tongariro peak, seen running from the centre to the right side of this photo: 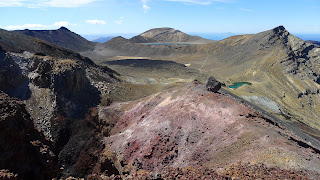 Next on my route was Red Crater, followed by a swift run down grey coloured soft scree just visible on the right of the photo. This took me into the Oturere Valley from where I turned back in the direction of my campsite. 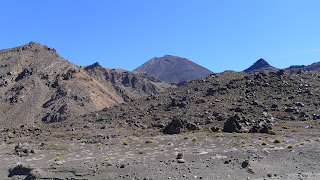 In the area to the east of Ngauruhoe I cut across country around the base of the volcano. This is a relatively rarely explored area. It took me a few more hours tramping across a variety of moraine ridges and blocky lava flows to reach my tent after a very satisfying day.