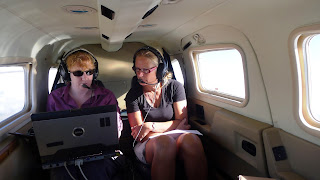 My next experience of a GeoNet gas monitoring flight was over Tongariro and Ruapehu. This time Karen Britten and I were joined by Fiona Atkinson (left in photo) who is part of the GeoNet volcano monitoring team. 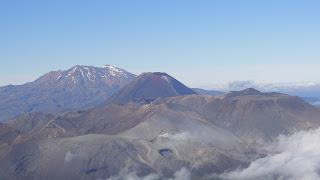 As we approached the volcanoes from over Lake Taupo, the small gas plume from Te Maari was visible. Because the plume is quite low against the mountain side, GeoNet cannot always monitor it by plane. They sometimes use a road vehicle instead, traversing under the plume along a nearby road. 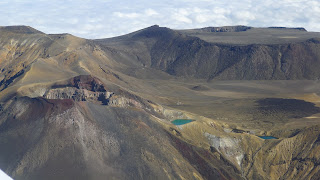 Our flight took us past the Red Crater (left) and the Emerald Lakes, where I had been tramping a few days before. North Crater on the right skyline is a solidified lava lake, whilst the dark lava flow in the middle distance on the right originated out of Red Crater. 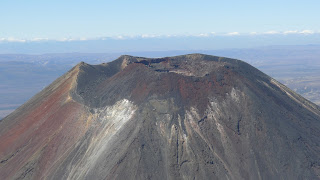 We circled Ngauruhoe several times just in case there was some evidence of gas emission, although non could be determined. If you click on the photo to enlarge it you can just see some people on the left hand side of the inner crater rim. 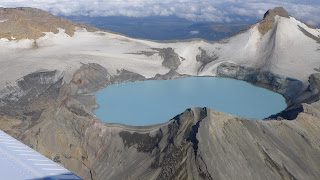 The crater lake of Ruapehu was a uniform pale blue colour, with no visible upwellings. Our gas measurements showed about 670 tonnes per day of CO2 , a little H2S (0.5 t/day) and about 28 tonnes per day of SO2. These figures are in a similar range to those from the end of January, but somewhat elevated compared to December. 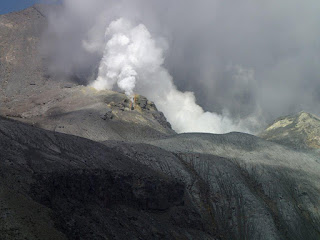 On the way back we decided to take a closer look at the Upper Te Maari crater area. There is still a lot of grey ash covering the area from the November 21st eruption, and yellow sulphur deposits around the fumeroles. 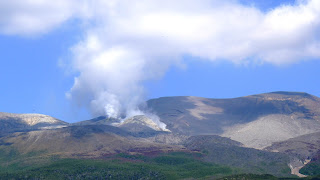 Having landed back in Taupo, I drove down to Whakapapa Village, and was able to look at the Te Maari area from the road on the way. The area affected by ash can be seen extending across the mountain side. 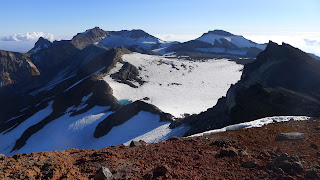 I decided that I just had time at the end of the day to walk up Te Heuheu peak on Ruapehu. It is on  the north edge of the summit plateau.  The crater lake is just beyond the sunlit snow in the centre of the photo, out of sight behind the ridge

In case you haven’t seen in yet, here is a video of the Te Maari eruption made from the webcam shots on November 21st: