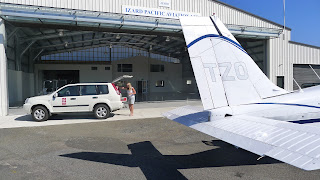 Yesterday I joined Karen Britten on  a GeoNet gas monitoring flight over White Island. This was to check the flux of volcanic gas emissions following an ash eruption a few days ago.
Check this GeoTrip page if you are interested to visit White Island / Whakaari yourself: www.geotrips.org.nz/trip.html?id=541 ) 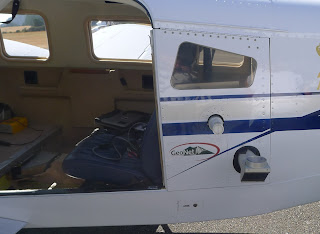 The plane is modified to allow the equipment to extend outside so that the measurements can be made. carbon dioxide (CO2), hydrogen sulphide (H2S) and sulphur dioxide (SO2) are the most common volcanic gases and are all measured during a gas flight. 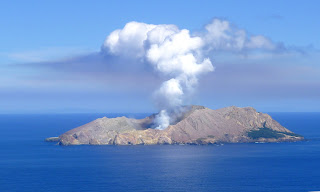 Approaching White Island, we could see the plume extending first vertically, then off to the West at an altitude of about 2 000 feet. In the distance you can see a grey haze in the sky which is the extension of the plume. 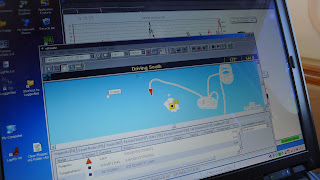 Our first task was to fly in circles at constant (neutral) throttle. Through using our GPS to measure our ground speed, we could calculate the effect of the wind on the plane, and thus work out the wind direction and velocity. The track of the plane is visible on the computer screen. 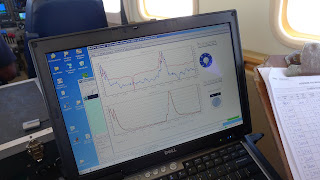 Next we flew under the plume at right angles to the wind direction and at the lowest permissible altitude of 200 feet. A Correlation Spectrometer (COSPEC) looks upwards through the plume and measures the amount of ultra violet light being absorbed by the sulphur dioxide. We passed under the plume several times in order to get an average reading. The wind speed is also taken into account to calculate the SO2 flux with this method. 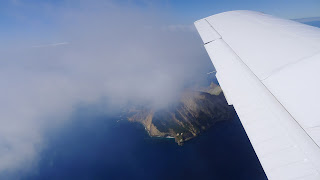 Next we flew in wide arcs through the plume, at a radius of about 3 kilometres from the crater. We worked our way contouring back and forth, rising 200 feet each time to get a total profile of the gases through the whole plume.

Later in the day Karen was able to process the data to show that the daily flux of SO2 was about 600 tonnes. This is at a relatively elevated level compared to mid January, but has not changed much in the last month.

Here are the complete data that Karen processed after the flight, comparing them also to the two previous gas flights: 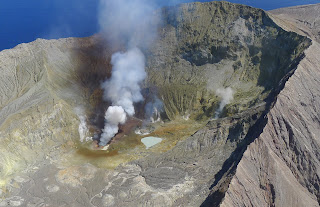 Lastly we flew close to the main crater to get a look at the changes that had occurred in recent days. Most of the gas emission was coming from a small crater or tuff cone, and there seemed to be an area of red brown which is probably ash from the recent eruption. 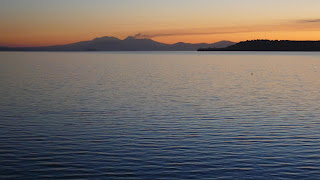 Back in Taupo after a total flight time of about 4 hours, I had this evening view across the lake to Tongariro. The Te Maari crater was producing a thin plume of its own extending across the sunset.