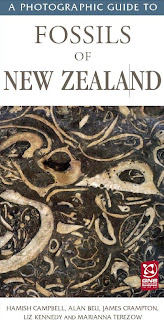 GNS Science recently produced a new “Photographic Guide to Fossils of New Zealand”. It is a small, pocket sized booklet, packed with photos and information about many of our characteristic fossils. It also contains a very readable introduction to New Zealand geology, the fossilisation process and the geological history of New Zealand.

You can find more information about the book, including how to get hold of a copy; here. It is published by New Holland Publishers. 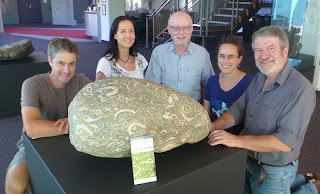 Here is the team that created the guide, from left to right: James Crampton, Marianna Terezow, Alan Beu, Liz Kennedy and Hamish Campbell.

I asked each of them to choose their favourite image from the book and say a few words about it.

Here are their comments:

My favourite fossil is the small Cretaceous ammonite on the bottom of page 62.  Ammonites are very rare in New Zealand Cretaceous rocks, although they are extremely common in other parts of the world.  This one came from the coastline of Raukumara Peninsula, north of Gisborne, from a lovely, wind-swept, wild, and pohutakawa-lined rocky shore.  This specimen is well preserved and shows how some species deviated from the typical, simple, flat spiral shell form of most ammonites – in this case, as the animal grew, the shell became partially uncoiled to end up looking like a hook.  In life, the animal had many tentacles and extended out of an opening in the shell at the point where the label is fixed (this opening is now filled with rock).  This ammonite was found with many fossils of strange clams that were specialised to live on deep-sea seeps – places where methane was naturally bubbling out of the sea-floor during the Cretaceous Period.  These clams probably ate bacteria that, in turn, survived by using chemical reactions to ‘feed’ on the methane.

My favourite photo is the one that resides on the title page. It’s an image of a late Oligocene-Miocene limestone block from Hakateramea, South Canterbury. I love this photograph because it showcases some of the great variety of marine life-forms found throughout New Zealand’s fossil record. From small filter-feeders like the clam Limopsis to the large, carnivorous snails such as Magnatica, this image is a snap-shot of a once-living, thriving marine community. I find these life stories of community dynamics that fossils tell us very fascinating.

My favourite image is Struthiolaria frazeri, on page 122. This is the largest, most spectacular and most elaborately sculptured of the “ostrich foot shells”, family Struthiolariidae, which are almost entirely limited to New Zealand, and are one of the really characteristic elements of our fauna. They display a long, complicated history of evolution and extinction, with more than 35 species occurring as fossils over more than 40 million years, and yet only two species still live here now – Struthiolaria papulosa (top of p. 123) and Pelicaria vermis (p. 123, lower on the page). Struthiolaria frazeri provides a clear example of extinction, as it is a key fossil for identifying the end of the Nukumaruan Stage, becoming extinct suddenly 1.6 million years ago, at a cooling spell.  Presumably it was a warm-water species, as it is mainly found in shallow-water rocks in central and northern Hawke’s Bay, with a few specimens found near Whanganui. The very obvious sculpture of prominent, square-section spiral ribs, the tall spire, and the short, oval aperture with thick, smooth lips and a deep sinus in the top of the outer lip make it easy to identify.

My favourite image is of an undescribed Cretaceous broadleaf angiosperm leaf base and podocarp foliage on page 54. These beautiful leaf impressions, along with many other leaf specimens, came from very hard grey sandstone overlying a thick coal seam which was mined at the Strongman Mine opencast near Greymouth. They are a glimpse of the vegetation which made up New Zealand’s Late Cretaceous forests which were very different to those of today, a time when dinosaurs still wandered about, perhaps even eating this kind of angiosperm leaf. These leaf impressions are generally well-preserved, with the ridges of prominent veins providing texture to the impressions. An assemblage of leaves such as these can provide us with a fascinating picture of the past including what kinds of plants covered the Late Cretaceous New Zealand landscape, how diverse the vegetation was and what the climate was like when the plants were growing.

“My favourite image is on p.25. It captures not only fossils but also a ‘fossil moment’. After all, photographs are fossils of a kind…preserving a record of things that happened long ago. This beach on the north coast of Chatham Island is famous because this locality, with fossil oysters that are 50 to 55 million years old, is the very first fossil locality to be formally recorded in the scientific literature from New Zealand. It was collected by Ernst Dieffenbach in 1839 and he sent the fossils to the Natural History Museum in London. Oddly enough, this locality was ‘lost’ for more than a century because it was buried beneath a sand dune. It was only rediscovered by us paleontologists at the time of this photograph in 1995.”